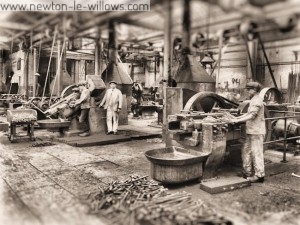 There was a Great Loss of Life by a Steam-Boiler Explosion at Newton..

We regret to inform that the Viaduct Foundry on the Manchester & Liverpool Line of Railway at Newton in the Willows, the property of Messrs, Jones, Turner, and Evens, was on MOnday morning last the scene of a dreadful and fatal steam-boiler explosion, by which eight persons are already dead, and two others are lying without much hope of recovery.

It appears that Messrs Jones & Co. employ about 200 men, and in the course of their business use two steam-engines, one of sixteen horse power to drive the machinery, and one of eight to blow the blast for the smiths furnace. Last week a new boiler was attached to the eight horse-power engine, and the foreman of the yard, Joseph Dangerfield, who superintended the erection of the boiler, resolved upon setting it in motion himself. It was tried on Saturday morning and found to have worked well. On Monday morning he was called by the watchman at five o’clock, and immediately proceeded to light the fire and get the steam up in the boiler. He had accomplished the task by six o’clock. At that hour the men came into work, and almost tem or maybe a dozen of them stood around the mouth of the furnace, anxiously waiting to witness the evolutions of the engine, which had been stopped for the purpose of attaching the straps communicating with the machinery of the foundry. This had been in part accomplished when the steam and water burst through the flue of the boiler, and carried the contents of the furnace and part of its brickwork a full forty yards from the building. The explosion was terrific. The bystanders and Dangererfield were carried, as if by a gun-shot, into a corn-field on the opposite side of the foundry palings. The palings were all knocked down and the corn ripped out or levelled to the ground for a full twenty yards distance.

Three of the men were picked up quite dead. Their names are Joseph Dangerfield (the foreman), Samuel Appleton (Striker) and George Fazakerly. John Dean, a striker, was found on his knees fervently praying to the Lord to havemercy on his soul. He lived only until 10 O’clock that same morning. Thomas Price, another striker, was taken up insensible. John Parker was dreadfully mutilated. William Wells, a moulder, George Hough, a striker, William Dean, Mr Wilson, a fitter were taken dreadfully scalded and bruised. They were quickly attended by Mr Barrow and Dr Green of Newton, and Mr Gaskell of St Helens. George Hough and William Wells lived for only a few hours. Only one of the other poor sufferers is expected to survive.

At noon on Tuesday, a highly respectible jury met at the BUll Inn, in this village, to inquire touching the deaths of Joseph Dangerfield, Samual Appleton, George Fazakerly, George Hough, William Wells, John Dean and Thomas Price, these being the seven sufferers that had already died from the effects of the explosion.

The jury, prior to the inquiry, went to view the bodies, which presented a sad spectacle. Gangerfield had scarcely a whole bone in his body: Wells had both his arms broken, and the brains protruding through his skull; his lower jaw bone had also been carried away. The others were all dreadfully bruised and scalded. Two of the bodies were at the workhouse; the others were lying at the cottages near the works.

Peter Traverse, a labourer, residing at Burtonwood, stated that he was in the employ of Messrs Jones, Turner and Evans, and had worked at the Viaduct Foundry since last March. He knew all the deceased men. They all worked for Messrs Jones & Co. Dangerfield was the manager of the works, and had the overlooking of the setting up of the new boiler. Witness went to work about 20 minutes to six o’clock. There were by that time about twenty to thirty men standing before the boiler furnace. Witness was working that day as a coke burner. When the bell rang at six o’clock Dangerfield was working the engine. He directed witness to bring a can and fetch some oil, and said, after he had oiled the shaft, he would have a fair start. Dangerfield stopped the engine. Some men put on some straps, while witness oiled the shaft. When this was done Dangerfield started the engine.

There is a wall between the engine and the boiler. The engine had not been at work more than a minute when the boiler burst with a loud explosion. Witness stated that several of the men were thrown into the wheat field adjoining the workplace, that they were knocked through a sheet of paling. Dangerfield, Fazakerly, and Appleton were killed on the spot. Witness said that Dangerfield gave only one sigh before he died. Wells died at eleven o’clock in the morning. Three others were only just alive. The boiler was not burst, it was only the flue. The steam from the boiler quite darkened the windows. Mr Jones came in ten minutes after the incident. Witness saw Dangerfield look at the boiler pressure gauge cock a little before six o’clock.

Mr Jones in his evidence to the enquiry; desposed that he was dressing himself about six o’clock in the morning of yesterday, when he heard what he first concieved to be a loud clap of thunder. He immediately went to the foundry, and there found Fazakerly, Appleton and Dangerfield dead. The survivors were removed to their places of residence. The boiler was quite new. It was made at the witness’s foundry, and was fixed up and set going on Saturday for the first time, that it had worked well, and it was intended to be started on that Monday morning.

The engine was a ten-horse power, and the plates of the boiler were 3/8ths of an inch thick. The boiler was twelve feet long, and four feet and six inches in diameter. There was a tube through it of the same thickness as the boiler. The apparatus to the boiler was two gauge-cocks, and water-gauge, and it had two safety valves upon it. It was calculated that it would bear a pressure of 80lbs. to the inch pressure. Only 35lbs/ was upon it when the accident happened.

Mr Jones the witness had endevoured to ascertain the cause of the accident, and he is of the opinion that there was not a sufficient quantity of water in the boiler, which caused the flue to get red hot; and that when the engine pumped in the cold water, the boiler collapsed. Witness remarked that the boiler remains firm and sound on its bed, there is an appature made in the flue at the further end of the boiler. Dangerfield had got up the steam, and had attended the erection of the engine throughout. Witness considered that Dangerfield was perfectly competent; but in this instance had not been sufficiently cautious. The steam was not blowing off, in his opinion, hydrogen gas was formed in the boiler the moment the cold water was let in. He drew his conclusion from the fact of the engine not having worked more than one minute before the explosion took place.

Peter Ditchfield, the foundry watchman,in his statements to the enquiry, disposed; that Mr Dangerfield ordered witness to call him at five o’clock, and to get a fire under the boiler at half past four o’clock. Dangerfield arrived at the workplace soon after five o’clock. At that time the water appeared to be about a nails length from the top of the gauge. Witness said that Dangerfield did not try his gauge-cocks while witness was near him. Witness went with Dangerfield to see some eels on the top of the pond, they floated, in consequence of some lime having been thrown into the water. Dangerfield had not started the engines when witness left, about five minutes before the six o’clock bell was rang. Dangerfield fed the fire himself. A number of men were coming to the work just as he was leaving. The accident happened ten or twelve minutes after. Winess said that Dangerfield might have tried the gauge-clocks during the time that witness was unlocking the works doors.

John Ditchfield the works gate keeper confirmed this tesimony. He said that, had the accident happened only a few miniutes earlier, upto thirty men waiting to enter the foundry through the gate might have been killed.

Two other witnesses were called but they disposed no new facts.

The jury returned a verdict, in all cases, of “Accidental death,” occasioned by the insufficiency of water in the boiler, upon which they found a deodand of five shillings. They expressed themselves also to be of opinion, that no blame was attached to Messrs. Jones in the manufacture of the boiler.

William Parker died on Tuesday evening, making eight persons killed in all, and another man, named william Dean, was still insensible on Wednesday, and not expected to recover. There are however slight hoped for the recover of another man named John Wilson.

We are glad to hear that a subscription has been set on foot for the releif of the widows of the sufferers and their families.

The foreman, Joseph Dangerfield, has left a wife and seven children; William Wells, a wife (pregnant) and one small child, Samual Appleton, a wife and nine children, his wife is also pregnant and a cripple. John Parker has a wife and several children; Wilson who is still near death is also married, he came to work at the foundryon the morning of the accident from Stockport. The others were all single men.]