Although the Stockton & Darling-ton Railway was the first public railway on which locomotives were used, the Liverpool & Manchester Railway was the first in the accepted sense of the word today. The scheme for a railway between the great port of Liverpool and the thriving cotton-manufacturing town of Manchester, was first entertained as a practical proposition in 1821, when a preliminary survey of the proposed line was made. The company was formed in 1824, and George Stephenson was appointed Chief Engineer in 1826. The route had to be amended as the result of the strenuous opposition which the company encountered, and the line finally approved involved crossing the Sankey Valley, near the present Earlestown Station, 14 miles from Liverpool. Through this valley passed the Sankey Navigation, built by Brindley in 1757 to join the St. Helens coalfield with the River Mersey, and also the Sankey Brook. It is something of a coincidence that this canal, which was the first to be made by cutting an independent channel, should be crossed by one of the first public railway viaducts in the world.

Stephenson was confronted with the problem of how to carry the railway over the valley without obstructing traffic on the canal, and without using steep gradients. It was decided eventually to form an embankment over the western half of the valley, starting just beyond Collins Green Station, and stretching approximately 900 yd. east to reach a height of over 50 ft., and to construct a viaduct over the canal and stream. A loop in the canal was eliminated, and the curve of the waterway altered to a constant radius. This deviation allowed the viaduct to cross the canal at a less acute angle.

Mr. Greenshields was the contractor selected to build the enbankment, and over a hundred thousand tons of marl and moss compacted with brushwood were used in its construction. The magnitude of this work can be appreciated when it is remembered that all the material used had to he handled and transported with only the simplest of mechanical aids. Today, the embankment is covered by trees, and it blends naturally with the surrounding countryside. 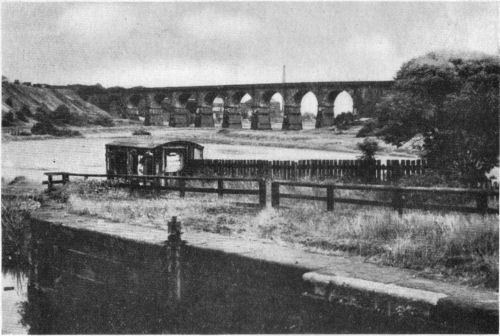 The Railway Viaduct over the Sankey Valley, with the old lock gates of the Canal in the foreground.

The viaduct itself has nine arches, which gives rise to the local name of the ” Nine Arches.” Each arch is of 50 ft. span, and carries a double track 70 ft. above the bottom of the valley. The width between parapets is 25 ft. Due to the soft nature of the ground, it was found necessary to drive about 200 piles varying between 20 to 30 ft. in depth, to provide a solid foundation for the ten piers of the viaduct. Henry Booth, Treasurer to the Company, in his ” Account of the Liverpool & Manchester Railway ” (1830) says that the piling was effected in 1828, and was a business of much labour and cost, but indispensable for the security of the superstructure. He describes the operation thus : ” The heavy ram employed to impart the finishing strokes, hoisted up with double purchase and snails pace to the summit of the Piling Engine, and then falling down like a thunderbolt on the head of the devoted timber, driving it perhaps a single half inch in to the stratum below, is well calculated to put to the test the virtue of patience, while it illustrates the old adage of – slow and sure.” The expenditure on the viaduct during the year ended December 31, 1828, was ?32,223 6s. 9d.

During the excavations, a tree was found buried 14 ft. below the ground, and this seems to indicate that there may have been a considerable alteration to the level of the valley floor. Contemporary accounts state that Stephenson thought that the River Mersey had once flowed through the Sankey Valley, and this theory appears to be supported by the discovery of the tree.

The arches of the viaduct are built on sandstone slabs, and the arches them-selves are constructed of brick, faced with stone. The sandstone foundation slabs are said to have been cut from a quarry about half a mile from the viaduct ; the quarry face can still be seen. According to local legend, the cottage which stands between the viaduct and the quarry was the lodging place of George Stephenson, and is known locally as ” Stephensons Cottage.” It is probable, however, that he stayed there only occasionally, since work on other parts of the line would occupy much of his time. More probably Mr. Holkyard, the resident engineer, and his assistant Mr. Fife, lodged there during the construction of the viaduct.

The viaduct was built at a total cost of ?45,208 1.8s. 6d. Apart from minor repairs, it has withstood the strains of increasingly heavy traffic for well over a century. Credit for the architectural features, which give the viaduct a hand-some appearance, must be given to Thomas Gooch, the Chief Draughtsman ; but George Stephenson must be accorded the praise for the general design of the structure. Etchings prepared in 1830 show the viaduct in detail, and also give a picture of its rural surroundings at that time.

from an Article in The Railway Magazine dated July 1952, the original article was written by Mr W. R. Watson. Transcribed by Steven Dowd ©2004