On Saturday afternoon, at Earlestown, Lord Newton unveiled a memorial of the South African war, which has been erected outside the Town Hall in honour of fifty men of Newton-in-Makerfield who volunteered for service in that historic struggle. The cost of the monument, about £360, is defrayed out of the local fund started in 1899 for the relief of necessitous cases arising out of such service. Much of the money was contributed by working men, and happily out of £991 raised it was found necessary to distribute only £215 in assistance. Of the remainder it is intended to devote £200 to the formation of a nucleus for the provision of a cottage hospital. The memorial, designed by Messrs. Dring and Manchester, of Earlestown, and carried out by Messrs. Scott and Prescott, of St. Helens, consists of the figure of a Yeoman carved in white marble and fixed in an ornamentally designed base of various granites. On the panels of the pedestal are inscribed the names of all the local Volunteers who went out, chief place being given to the record of those who lost their lives on duty. These were Lieutenant Hugh Stewart McCorquodale, of Thorneycroft’s Horse, and Sergeants S. Swann and A. Oubridge, and Troopers R. Collings and W. A. Frost, of the Lancashire Hussars. Thirty-two local men of the Hussars joined the Imperial Yeomanry, and the fifty were made up by ten members of the 1st V.B. South Lancashire Regiment, one of the 6th V.B. the King’s (Liverpool) Regiment and seven belonging to other corps.

Though showery weather on Saturday afternoon interfered somewhat with the success of the open air proceedings, there was a great concourse of people in the streets near to the Town Hall, and much interest was taken in the proceedings. The “C” Squadron of the Lancashire Hussars, under Major Earl and Captain Street; the “G” Company of the 1st V.B. South Lancashire Regiment under Lieutenant Fulton Smith, and the “ F ” Company of the 6th V.B. the King’s (Liverpool) Regiment, commanded by Captain Parker, were drawn up in front of the platform on which the opening ceremony was performed. Lord Newton was accompanied on the platform by his son, the Hon. R. W. D. Legh, Colonel R. Pilkington, M.P., Lieutenant-Colonel Murray, the Vicar of Earlestown, and others. The Chairman of the Fund, Mr. C. B. F. Borron, formally requested his Lordship to unveil the statue. 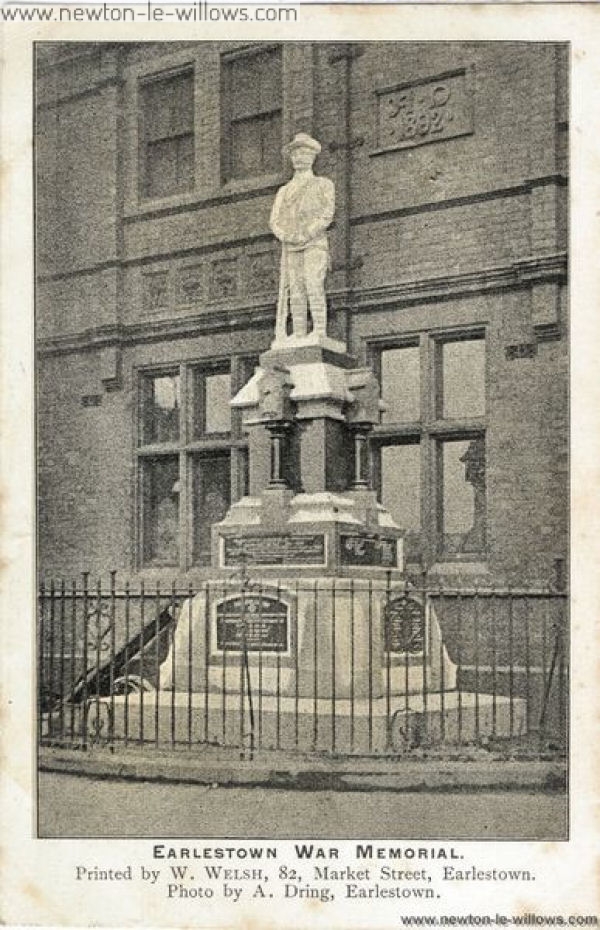 Lord Newton said the war was an episode in our history which showed the British nation in its weakest and strongest aspects. It showed us at. our worst when it showed the result of vacillation, when it revealed the want of preparation and that want of forethought which had unfortunately so frequently been our national characteristics, and finally when it disclosed that want of restraint and responsibility, which led us to magnify successes out of all due proportion, and led to much vain glorious boasting. But it also showed us at our best when it brought to light the enterprise, the generosity, and the patriotism of the individual, when it showed that this country refused to be daunted by failure, when it showed the determination on the part of the nation to see the matter through, and finally when it evoked that patient and steadfast courage on the part of officers and men which eventually brought success to the British arms. They could dwell upon the brighter side of the picture with legitimate pride, but let them not exaggerate those feelings.

Personally, he felt it was almost presumptuous to compare what we did and what we suffered in South Africa with what was now being done and suffered in connection with the Japanese nation. In that case not only had there been unparalleled achievements by land and by sea. but the Japanese people had borne the sacrifice imposed on them in a spirit which had aroused the reluctant admiration of the civilised world, and they had exhibited to the full those qualities which we had always imagined to be the special attributes of the Christian religion. If ever we were involved in war again, and the chance of such a contingency could not be permanently eliminated, he hoped our nation might show the same feelings and qualities as those manifested by our allies in the Far East.

Mr. Borron afterwards formally presented the memorial to the local authority, and it was accepted by Mr. T. Ormand, chairman of the Newton-in-Makerfield Urban District Council. 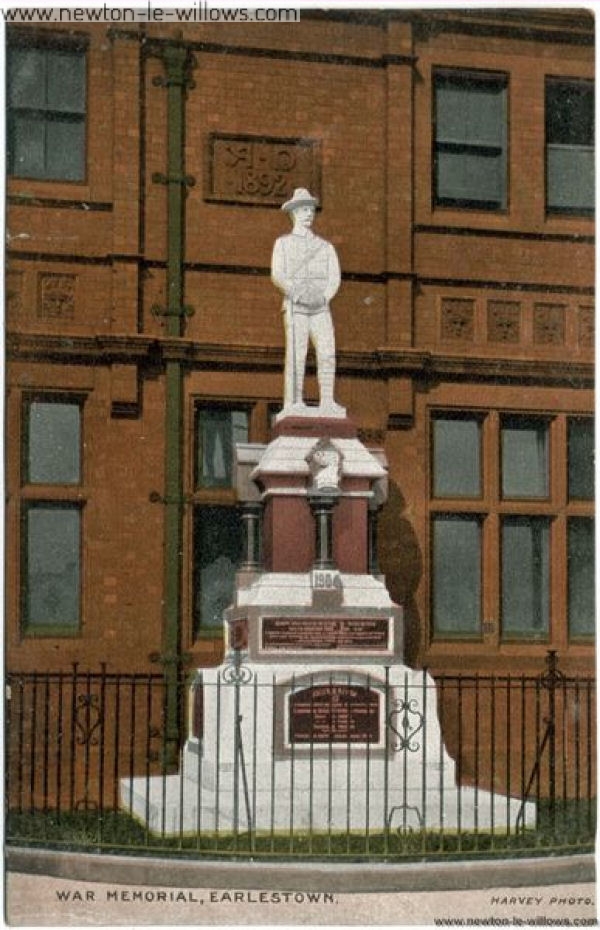 “ The last post ” was sounded on the bugles, and the massed bands played the National Anthem before the company dispersed. There was afterwards a reception in the Town Hall.