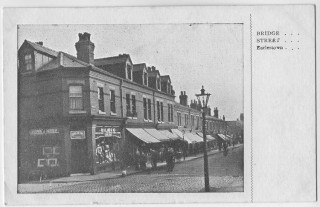 Earlestown on Monday night was the centre of a scene absolutely unprecedented in its history. The primary cause was of course; the bitter feeling that has been gradually growing stronger against German aliens throughout the country a feeling which reached fever heat on the day following the sinking of the “Lusitania,” gathered in intensity on the Sunday, and then, when Mondays papers told the tale of how Liverpool, had set the example on Sunday evening, it rose to such a height here that there Was no containing it, and “on Monday” night it reached delirium point. The feeling was intensified during the course of Monday by a rumour which was circulated to the effect that the 4th and 5th South Lancashire Regiments had been badly cut up as a result of the use of asphyxiating gas by the Germans.

The names of prominent St: Helens officers who were supposed to have been killed passed from mouth to mouth, and this probably brought about the climax.

It was freely talked about during the day-time, and was the one subject under discussion at the various works from morning until night, and it was an open secret that something was to be attempted during the course of that evening.

Anti-Germanism in Earlestown centred almost entirely on one point; and that was the shop over which has hung for some months?since, in fact; a similar but less serious affair caused its appearance -a Union Jack.

This was the establishment of Mr. Reiss, EarIestowns most highly patronised pork shop. Mr. Reiss has been a most inoffensive citizen for anything anyone knows to the contrary, and has for many years been a naturalised Britisher, but the human passion is a dangerous thing when roused, and such events ,as the dastardly deed of Friday night, are calculated to arouse the passions of everyone against all things Germanic.

Earlestown proved no exception and all respect for a tradesman of long standing was thrown to the winds by the more antagonistic section of the crowd perhaps we should say in extenuation of the circumstances, by those who have friends and relatives themselves in danger of suffering (or who have already suffered) at the hands of the Germans.

We have said It, was an open secret that trouble was afoot, and it was, soon evident that the police were well aware that there was to be work for them that evening, for Bridge street was well patrolled, and the people kept on the move.

Towards eight oclock, it became necessary to suggest to many women with shawls over their heads that they must seek other pastures besides Bridge street, and the juvenile element, after one attempt with a drum, found the street to them “banned` and barred, forbidden, fare.”

This soon resulted in a living barrier stretching across each end of Bridge street, down which only innocent and quiet-looking citizens were allowed to make their way, and perhaps one of every half-dozen of these bore in his coat (you could see it if you looked close) the badge of the special constable.

The police did their work quietly, thoroughly, and with the good humour that meant that after all they could sympathise with outraged feelings, if they could not allow a disturbance against the law, and for over two hours the strange state of affairs reigned, with the living barrier at each end of the street gradually assuming larger proportions.

The crowd cheered and sang while they waited, and once or twice there was a break through as some vehicle Opened a pathway, but the consstables firmly closed In again, and the advance of the tall figure of the Inspector with his subordinates who were within the prescribed area, sent those who had got through scurrying back again.

But law and order is not the only force that can boast of ingenuity, and stones and bricks began to fall from somewhere in the neighbourhood of the shop in question, which it being the butchers early closing day had been closed since, noon, and fact became known that people in Back Bridge were “aiming” over the roofs of the shops opposite.

Mr Riley had partly boarded up his window adjoining the shop of Mr. Reiss, and on the other side Mrs. Devereux, by lowering the outside shop blind was `able to A protect her window from stones thrown in this way: But the inevitable could not be kept up for ever, and at last, as the sound of, breaking glass was heard, from the Rams Head corner there was a rush, followed immediately, by a break through the cordon at the other end of the street.

The police seeing that it was hopeless to try to drive back the immense crowd, immediately formed. up round the shop, but it was useless to attempt to save the windows after this, and in a few minutes every pane on the premises was shattered. This did not satisfy the crowd, and efforts were made to rush and raid the premises and the police had all their work cut out to keep the people back. One agile individual managed to jump up and catch the Union Jack, the pole of which snapped, and he bore it off as proudly as if he had captured a German flag at the seat of war.

How long the police would have held their own it is impossible to say. Edibles that were in the window were snatched out in the rushes, but the crowd could not get a footing inside the premises.

Even, these situations were not without their ludicrous touches. “Hey up,” said one woman to a “special,” brandishing half-a-brick in her hand, “Just let me heave this through them windows. “All right,” was the retort, “but mind you aim” at Johnny Rileys, perhaps youll stand a chance of hitting Reisss then.” This was almost worthy of Punch.

So the struggle went on until the hour of midnight had passed, and the whisper went round that more police had been sent for from Leigh and were now on the way. The crowd watching and participating; however, still remained a huge one..

Then came the next move. It was obvious that whilst the lights from the shops on either side lit up the scene (for their own protections sake) it would be impossible to overcome the police and the shout went forth “Lights out.” Thinking discretion the better part of valour, one shopkeeper promptly obeyed,, but before anything else could happen. the muffled tread of a band of fresh police reached the ears of those on the out-skirts of the crowd and possibly thinking the strange policemen might not show as much forbearance as those whom they saw daily, the word was no sooner passed round than the crowd melted away like snowflakes at the appearance of sun-shine, and towards one oclock the gentlemen in blue were in undisputed possession, and able to make arrangements for boarding the premises, up.

Such was the beginning and end of Earlestowns anti-German riot. The premises have, it is needless to say, since been the object of much curiosity. The signboard. has been taken down and there is nothing now left to provoke the anger of those who do not like to see a German name flourishing in their midst.