Two War Memorials have been elected in the township, the fIrst of these was to the memory of our townsmen who fell or served in the Boer War. 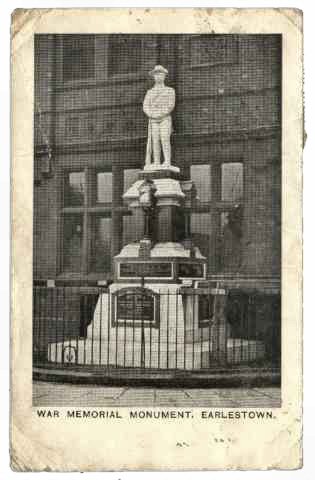 This is well-known to all residents as standing prominent in its position by the Earlestown Town Hall. It bears the names of those local men who served as well as those who fell, and in this comparatively small war there were quite a number of names amongst the latter.

The “Roll of Honour” at the close of the Great War was quite a different matter, for despite the fact that the staple industries of the district, engineering and mining were protected industries, there was hardly a family in the township that did not contribute its quota to the Army, either for active service or as units in home defence or garrison regiments, and so many were the names of those whose memory it was necessary to perpetuate that it was felt by all in the township that the memorial in this case ought to be something more than a mere obelisk, however elaborate the latter might have been and after various suggestions had been put to the public, who subscribed, It was decided that there could be no more fitting monument than a War memorial Cottage hospital.

All kinds of efforts were organised by various bodies in the town. to raise the necessary funds: decorated cycle parades, comic football and cricket matches. It was at one of these cricket matches which was held on the Viaduct Institute cricket ground that a team of tradesmen, shop assistants and others in humorous costumes played the Earlestown team. The conditions were that Earlestown had to bat with pick-shafts while the comic team used a cricket bat.

A great deal of amusement was created when one of the comics” came in carrying what appeared to he an ordinary bat. When he arrived at the wicket he calmly opened out his “bat”, which was hinged, to a width of two feet and planted it down in front of the wicket, He was a man of quite 20 stone and with his bulk, his pads and his bat, the wicket was entirely blotted out from view of the bowler. This batsman was Mr. James Lythgoe proprietor of the “Oddfellows Arms” in Legh Street.

Such efforts went on spasmodically up to the war of 1914. Nothing was done during the war, but when peace was declared, efforts were intensified, and it was not long before the Foundation Stone was laid and the Hospital became a reality.

The opening of the hospital took place en Saturday, January 10th, 1925, Lady Collingwood being the opener. 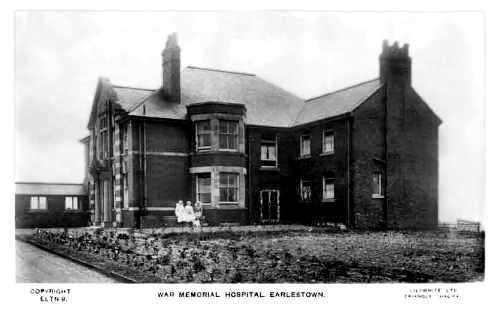 Already the hospital has proved a great boon to the township, and ex-patients are high in their praises con ning treatment there and benefits dirived. The hospital is situated on a site opposite the Isolation Hospital, Bradlegh Road.

It was said many times that a hospital in a small town like this would prove a white elephant, but results have proved the pessimists to be wrong. The people of the town have always contributed liber?ally and without complaint towards its up-keep.

As a result the township is now the possessor of the splendidly built hospital shown in the photograph herewith. a memorial to no fewer than 226 local men who laid down their lives Im. their country.

The building underwent extensive renovations a few years ago, with the installation of an X-ray apparatus, which was recently replaced by a new and up-to-date one. Although the present building has not yet been enlarged, and was only in-tended from the beginning as the adminis?tration block, we shall soon see considerable extensions to in the provision of an out-door department, to be followed by an increase in the number of wards and the enlargement of the nursing staffs quarters.

The requirments of outdoor patients have considerably outgrown the accommodation and are steadily increasing. The department has proved and is still proving to be of great advantage. It obviates the expense, inconvenience and pain of travell?ing to other towns, while at the same time patients receive the same expert treatment that they would get at Liverpool or Manchester.

Transcribed from “The Guardian, March 21st, 1930” and also “65 YEARS REMINISCENCES OF EARLESTOWN AND NEWTON BY COUNCILLOR TOM BALL”