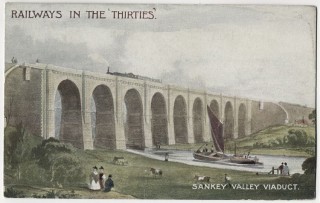 Tommy Burns was a young Widnes man who had been causing no end of a sensation up and down the country by his high diving feats. He laid no claims to being a great) swimmer but he had cer?tainly perfected the art of diving. Height never daunted him, he always gave a per?fect performance and did not demand very deep water for he had no sooner cut the water than he was swimming on the surface Burns was travelling about the country giving exhibitions of diving for what he could pick up in collections, and he came to Earlestown with the intention of diving from the Nine Arches into the canal. He stayed at the Prince of Wales Hotel in Earle Street, where the landlady, Mrs. Richard Lythgoe, having herself originated from Widnes, knew of his exploits.

In a few days the news circulated round the town that he would dive from the Nine Arches on Saturday. A huge crowd gathered on the canal bank and along the road leading from the Ship Inn to the farm. When Burns arrived, dressed in a bathing suit and overcoat, he climbed up the railway embankment behind the farm buildings and walked-along the top of the Arches with his attendant until he was at a point above the canal.

Just as he was poising himself to dive a police-sergeant and constable stepped out of hiding and arrested him for trespassing on the railway. He was taken by the police through the Viaduct. Works to the Police Station but after a while he was allowed to go on condition that he would not attempt to repeat the offence.

The crowd, realizing that Burns had been prevented from carrying out his promise, began to disperse. Suddenly another man was seen climbing the embankment. He walked along until he reached the spot where Burns had been arrested, and dived off wearing nothing but his shirt! This performer was a collier from Parr, and not being an expert diver like Burns. He injured himself when he struck the water. Apparently the injury was not serious, for after dressing and receiving the proceeds el a collection that was made for him, he walked into the Ship Inn.

(click here for a view from the bottom of the bridge)

Many people who had gone away before the colliers dive were under the impression that Burns had done it after all, and that was the reason for the contradictory state?ments that were heard. The collier never tried diving .any more. Tommy Burns made his last dive from Rhyl Pier and was never seen again.

from a publication printed sometime in the late 1940s.

65 YEARS REMINISCENCES OF EARLESTOWN AND NEWTON
BY COUNCILLOR TOM BALL

The publication is noted as compiled from items being Reprinted from the “Newton and Earlestown Guardian” by HARVEYS – “Guardian” Office, Bridge Street, Earlestown

Transcribed for use here by myself, from an edition supplied to me by website visitors, Trevor & Pat Haselton (now living in Port Mc Neill, BC, Canada), Trevor recieved the book from his father, Freddie Haselton. who he says was an avid Newton & Earlestown Historian
Steven Dowd
Steven.dowd@dowd.co.uk