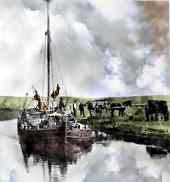 Sir Richard Western (1591-1652) built the Wey Navigation between the Thames at Weybridge and Guildford. In the 15 miles, there were 7 miles of artificial cut, 10 locks and 4 weirs. The fall to the Thames was 86 ft. This navigation was opened in 1653 (concurrently with the first turnpike Acts), and is a typical river improvement of the time. John Hadly opened the Aire and Calder navigation from Weeland to Leeds and Wakefield in 1703, which Smeaton extended to Halifax in 1764.

A similar project was envisioned for the Sankey Brook to St Helens, but Henry Berry (1720-1812) ran his 10-mile Sankey Canal beside the river, but independently of it. This canal, with a drop of 78 ft, was built 1755-57. The canal gradually liberated itself from the natural waterway, and began to strike out on its own.

An act of Parliment was passed, in 1755, for making Sankey brook navigable, and in 1761 another act was obtained, which provided for the extension of the same line: the present navigation is called the Sankey canal, and runs entirely separate from the brook, except at one spot about two miles below Sankey bridge, where it crosses it on a level: at the distance of about nine miles and a quarter from its termination in the Mersey, it divides into three branches; and from the Mersey to the extremity of the longest of these the distance is eleven miles and three quarters, with a fall of about sixty feet: this canal is of great benefit to the collieries and the various manufactories near it, in the vicinity of the populous town of St. Helens.

The Sankey ran from the Mersey, just below Warrington, to St Helens, and Henry Berry, Liverpools second dock engineer, began its construction on September 5 1755 – nearly four years before the first turf was cut on the Bridgewater.

It cost ?200,000 and it connected the South Lancashire coalfield with the navigable River Mersey at Warrington. The two men who were chiefly responsible were Henry Berry from Parr, and John Ashton whose father Nicholas possessed land in Ashton-in-Makerfield, Parr and Eccleston. Nicholas Ashton, a salt proprietor of Woolton Hall

But although the Sankey was a canal in every sense of the word, at the time it was not considered a true canal because, to simplify the passage of its authorising bill through parliament, its builders described it as a canalised river, claiming they planned to widen, deepen and make navigable the adjacent Sankey Brook.

In fact, this was never a possibility – the canal is a completely separate waterway throughout its length.

For much of its career, the Sankey, which was built wide enough and deep enough to accommodate the substantial Mersey Flats, carried coal from the mines around St Helens to the chemical works which were springing up along its course, notably at Widnes.

These works in turn provided the chemicals and dyes needed for the finishing of cotton goods. There were several plans to connect the Sankey Navigation with the rest of Britains inland waterway system.

One would have connected it to the Leeds-Liverpool Canal at Leigh, while another grandiose plan was to build an aqueduct over the Mersey below Warrington – similar to Brindleys at Barton but on a much bigger scale – which would have joined the Sankey to the Bridgewater.

But nothing came of either plan and the navigation remained isolated throughout its days. Much of the Sankey-St Helens is still in water, but some sections have been in-filled. A yacht marina occupies one stretch near Widnes.