The London Illustrated News, 3rd Dec 1853ON Wednesday week, the 23rd ult., an extensive Agricultural Draining Match was held on the Burtonwood Estate, the property of Samuel Brooks, Esq., banker, of Manchester, situate near the Warrington Junction station of the Liverpool and Manchester Railway. 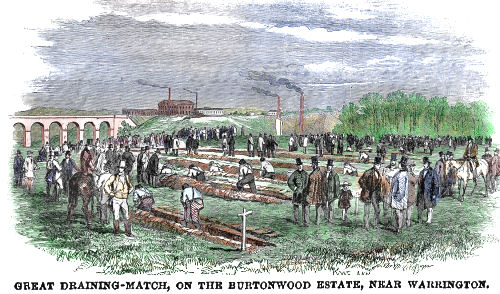 The field selected was well adapted for the purpose, and beautifully situated, commanding a magnificent view of the Sankey viaduct. The soil consists of a friable loam, on a marly substratum, with occasional beds of clay and sand.

The attendance of drainers and gentlemen interested in such works was very large?there being 1000 persons present.

The first event of the day was a match for diggers of drains. For this class of workmen, three prizes were offered of ?5, ?3, and ?2 respectively; the conditions being that three labourers should work at each drain, and the prizes should be awarded to those who should cut forty eight lineal yards of drain four feet deep, in the most workmanlike manner, with the least unnecessary excavation of earth, and without occupying more than four hours in the execution; superiority of work to be the first consideration in awarding the prizes. For these, thirty-five sets of candidates, from various parts of the kingdom, had entered, and twenty-eight competed, being started at ten oclock by the firing of a gun.

The prizes were awarded as follows, viz:-

The execution of the work was generally good, and, elicited unusual praise, several of the candidates who were disqualified through not having performed their work within the time specified, displayed much merit.

The work of H. Conways set, being the first completed, and very fairly done, attracted much attention; and the men were liberally rewarded by voluntary donations from several of the gentlemen present.

For the pipe-laying, two prizes were offered, of ?2 and ?1 respectively; thirteen candidates entered, and six competed.

Owing to the lateness of the hour, the number of pipes to be laid was reduced from 300 to 144, for the 48 lineal yards cut by the drainers.

The conditions were that the prizes should be awarded to those who should lay their pipes in the most workmanlike and expeditious manner, placing each end to end, so as to form one continuous pipe; the execution of the work to be the chief consideration.

This work was commenced by signal, as before, and the prizes were awarded as follows, viz.:?

Additional interest was excited by the field being situated near to Bradley Hall, a farmhouse standing upon the site of an old mansion bearing that name, erected in the 15th century.

The remains of the entrance gateway, with grooves for portcullis, drawbridge, &c., and the moat, still in good preservation, were very interesting to the lovers of antiquity.

About ?6 was collected by John Williams, Esq. for distribution amongst the unsuccessful competitors, in addition to which each one was paid for the work done.

The steward of the match was Mr. Thomas Suttle, sub-agent to Samuel Brooks, Esq., of Whalley House.

This text is transcribed by Steven Dowd from original material, published by The London Illustrated News, 3rd Dec 1853

This transcription, its errors and omissions are my own transcription from the original published text and are copyright of Steven Dowd, if you plan to use this text or image on your website, or publication, please contact me.