The earlier survey gives the more correct representation of the place, as there have certainly been at least two barrows, one in the field on the east, the other in that on the west side of the lane. The latter, which we shall first describe, is on a farm called " the Highfields," the ground sloping considerably from the north. The tumulus is about six feet above the level of the lane, and the ground to the west is uneven, forming a sort of bank, while the fence on the south has a perpendicular descent of three feet into the next field. The tumulus itself is not very well defined, as it has long been under cultivation, but it may be thirty yards in diameter, and its summit is distinct enough.

On trenching this mound in November, 1859, deposits of burned bones were found at some distance from its centre, on the slopes to the east and south. These bones were in small fragments, apparently in distinct heaps, mixed with minute particles of burnt wood, and one or two fragments of brown, thick, ill -burnt and rude pottery turned up, not however appearing to have any connection with the bone deposits the only portion of which offering any recognisable character, was the head of a thigh bone of a subject twelve or fourteen years old. About six feet deep in the centre, the red sandstone rock was reached.

There seems reason for believing that this tumulus may have been disturbed, and that the urns in which the bones had been placed having been broken, the bones were again buried while the broken urns were destroyed; at least the two or three pieces found would lead to this conclusion, especially when the later discoveries are taken into consideration. Some labourers, working in the field on the other side of the lane fifteen years ago, came upon an urn with bones in it, apparently of a similar description.

This tumulus was removed at the beginning of the present year, and the men in their operations, cutting into some soft black stuff, struck a spade into an urn and broke it into pieces : it seems to have been of large size and has a feathered pattern scored on the outside, (plate VII,) in other respects agreeing with the fragments already described. It contained bones in the same fragmentary state as those found on the west side of the lane, and with them a stone hammer-head and a bronze dart.

The hammer is small, nicely shaped, the face bevelled off for half-an-inch, and the beak with a remarkable cutting edge. It is quite smooth, and very possibly might be polished, and consists of porphyritic clay stone, with large crystals of felspar. It is five inches in length, and rather more in its greatest circumference ; the diameter of the face, -inch ; and the length of the beak (which has the axe form in the same direction as the handle) is 1 f-inch ; the weight is rather more than nine ounces. (Plate VII.) The dart is four inches and a quarter long, and one and a half wide at the shoulder. It has the common shape of the spears in early representations, as those on the column of Trajan. The part that has been inserted in the shaft seems very weak ; it is about an inch in length, and has a hole at the extremity, through which a rivet has been passed, but it may have originally been longer ; at present it weighs six drachms. (Plate VII.)

As these two objects were placed within the urn, it is evident that the head of the dart must have been removed from its shaft ; the handle of the hammer must also have been put aside, the head being broken in the centre with a clean fracture right across, and, what is curious, without either portion receiving any injury or splintering.

Two questions naturally arise what is the age of the deposit?
To what people did these relics belong?

And in reply to the first we may say that in the present state of our knowledge no satisfactory answer can be given; to the second, more decidedly, to the ancestors of the present inhabitants of South Lancashire. But as both of these propositions have been and will be disputed, we shall have to consider briefly the grounds on which they rest.

With reference to some other stone implements in the Warrington Museum, Mr. Syer Cuming, in an interesting paper given in the Journal of the Archeological Association for Sept., 1859, p. 231, expresses himself thus:-

" These stone relics give a favourable notion of the skill and patience of
" the archaic denizens of Lancashire. But with all their skill and patience,
" they were yet doomed to fall before the advance of another race, a race
" Surpassing them in art and science and mental culture, whose advent to
" our shores was the advent of civilization civilization which conquered
" and subdued the savage tribes of the stone period, and upon the ruins of
" barbarism erected principalities and kingdoms, whose brazen-equipped
" hosts breasted the tide of fresh invaders, and rendered the name of Celt
" a proud and lofty epithet." 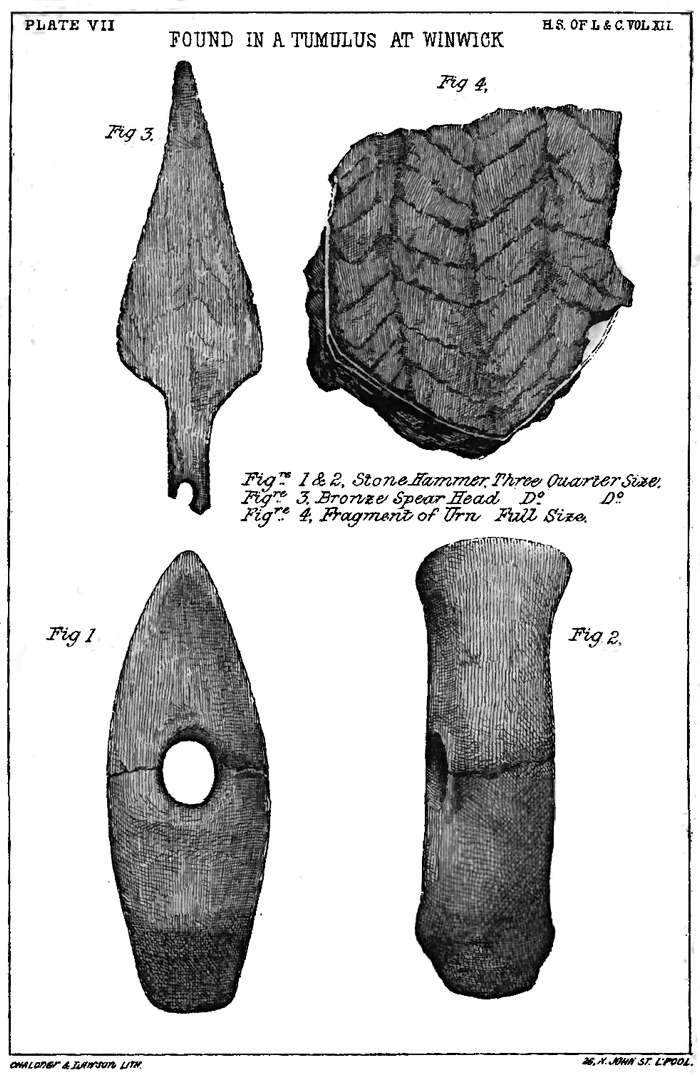 It must be confessed that the arrangement of ages of stone, bronze and iron does not help us in the present case. True, we may imagine the proud and lofty Celt killing the native barbarian, and getting his little stone hammer, which, as the spolia opima of his spear, was buried with his ashes; or we may suppose the barbarian killed the Celt, and the little spear was preserved as the token of his victory. But is it not much more likely that these two articles were really formed at the same period ? Would not as much skill and art be Inquired to form the hammer as the javelin ? And can, we suppose that iron was altogether unknown when they were manufactured?

We must assume, upon this hypothesis, that the Celts so completely rooted out the barbarians, that not a trace of them remains, except these stone implements while the Saxons so exterminated the Celts, as to leave nothing whatever that has any characteristic mark behind them as bronze remains undoubtedly belong in abundance to the Romans, and we have yet to learn what difference there is between the Roman and Celtic bronzes.

If we do not wish to be misled by theories, however ingenious, it is highly expedient to believe that the population of any given district is descended from the very earliest inhabitants which history records, and of which any remains exist. Hypothetical national destructions are very shadowy matters indeed. Investigations, where there is nothing to investigate, must lead to illusions visions, more or less dreary, in the dream-land of imaginative antiquarianism. The finish of an implement like this hammer-head, its shape or symmetry, much less the material, can in no case lead us to the period when it was formed, or the person who formed it.

The spear-head belongs to all ages and all nations; it is the simplest and commonest form, and the metal of which it is made is the principal material of which such articles were formed for centuries. When metals were scarce, and we have neither iron nor copper in South Lancashire, stone would naturally be made use of for such implements as hammerheads, but even where brass and iron were well known, it would still in some cases be economical to use what was so ready at hand.

In our museum there is an instrument, like a tailor’s goose of very large size, made of stone, with the initials of the owner and the date 1607, used in fulling cloth ; and a stone bat, which has been put down as a war-club of the primeval savage, seems far more likely to have been a mallet for beating hemp, or some such purpose, and may have been used as lately as the tailor’s goose.

The great drawback of these hypothetical periods is, that while they are of little practical use, except for the very secondary one of arranging a museum upon an easily understood but misleading principle, they take away the investigator from the real matter and mode of the inquiry, and, like all such errors, are a hindrance to truth. In some graves are coins which cariy a date with them, and in others Roman remains which belong to the first four centuries of our era. But in tumuli, such as those at Winwick, there is nothing to show whether it was raised six centuries before or six centuries after that period ; and we want more evidence than the stone hammer to show that the people to whom it belonged were savages, to whom metals were unknown ; and more than the bronze spear head to prove that it was formed by the Celts, who are assumed to have been equally ignorant of the use of iron while these last are fancied to have been annihilated by the Saxons who employed that metal. There can in fact be no reason why the original barbarian could not have worked copper or iron in his native land, just as the Celt found his copper in his country, wherever that might be, or the iron man his iron.

In conclusion, I would submit, with great deference, another system of classification for antiquities found in England. It would include three great classes:

FIRST, all those remains which offer no marks of Roman art or influence.

SECOND, those where the foreign taste in the design or manipulation can be detected.

THIRD, pure Roman, Greek, Oriental or other easily distinguished articles, which will be neither numerous nor important. It would be especially requisite to form provisional geographical subdivisions at first general and extensive, as South and North of the Thames or the Humber Cambrian, &c., &c. These would become more definite with increasing knowledge.

And, lastly, a Chronological division might be made of Primeval, before Julius Caesar; Romanic, to the fifth century; and Mediaeval, after that date ; not, however, without good evidence that the period to which any object was assigned, rested upon a sufficient basis.

This text and photo version ©2007 Steven Dowd, transcribed from the book " TRANSACTIONS OF THE HISTORIC SOCIETY OF LANCASHIRE AND CHESHIRE. VOLUME XII. SESSION 1859-60".