The first section of the 63 miles long North-South Motorway through Lancashire to be completed was the Preston By-pass (8 miles)—Britain’s first motorway—opened by the Prime Minister, the Right Hon. Harold Macmillan, M.P., on the 5th December, 1958.

The second section was the Lancaster By-pass (12 miles) opened by the Chancellor of the Duchy of Lancaster, the Rt. Hon. Dr. Charles Hill, M.P., on the 11th April, 1960.

The Minister of Transport authorised the construction of the third section of the Motorway between the southern end of the Preston By-pass and the Cheshire Boundary in 1958. This is some 28 miles in length and involves the construction of 76 bridges, including the large multi-span viaducts at Thelwall and Gathurst. In addition there are two bridges on the Wigan South Link and one on the Winwick Link, making a total of 79 in all.

In view of the time necessary to complete the two large multi-span viaducts – at Thelwall and Gathurst, authority was given for work to commence in September 1959, in both cases. Work on the North Ashton Railway Bridge, also required to be started in advance of the main motorway, was commenced in April 1960 and has been carried out as a separate contract, designed and super- vised by the British Transport Commission.

Work on the 26 miles of main motor- way construction was inaugurated by the Minister of Transport on the 24th February, 1961, and, when completed, it will supersede the existing Trunk Road A.49 through Lancashire, which has been described as one of the worst sections of Trunk Road in the country. 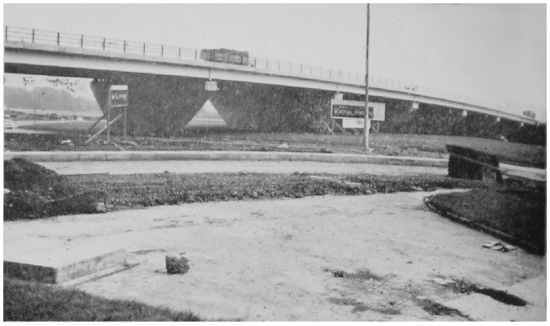 “Close view of the flyover at the junction of the A.49 and the East Lancs. Road. Eventually this is to be a three-tier flyover which will be one of the largest in the country”

The only missing links in the route will then be the 131 miles between the Preston and Lancaster By-passes which will be completed in about four years, and the section to the north of the Lancaster By-pass, where Consultants are preparing a report on the continuation of the route northwards.

In addition a link road one mile in length is being constructed from the A.49 at Winwick and the cost of this and the main scheme will total approximately £23.5 million.

The Motorway is shown in black on the plan appearing on page 9. The completion date of this Section is scheduled for June 1963. The road runs in a North Westerly direction from Woolston to Winwick, passing to the east of Warrington and St. Helens. It then turns northwards, passing to the West of Wigan and continues northwards joining the Preston By-pass at Bamb2r Bridge. With the exception of the Leyland and Wigan Sections the route is predominantly rural in character. Its construction involves the demolition of 59 houses.

The minimum overall width of the road is 124 ft. within which there will he dual 36 ft. carriageways, a 15 ft. wide central reservation and 10 ft. wide paved hard shoulders and grass verges. It is designed for speeds of 70 m.p.h. 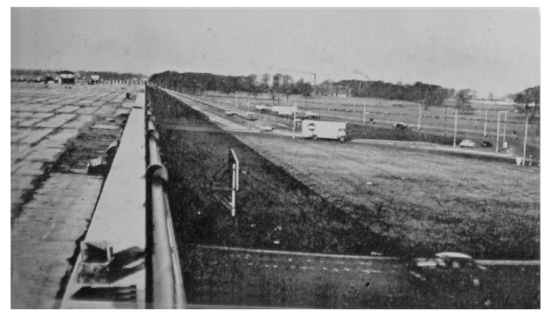 “View from the top of the flyover, looking north. Haydock Park Race Course can he seen on the right”

From Warrington to Charnock Richard the motorway passes over coalfields. In addition to subsidence on approximately 91 miles (expected to exceed 10 ft. in parts) a number of reinstated opencast workings and old mine shafts are cut into by the roadworks. On these lengths the carriageways, drainage and light bridges have been designed to minimise damage from subsidence. All deep mine-shafts under the carriageways are being rafted over.

In cases where the old deep mine shafts had not been completely back-filled this had to he carefully done with selected lump stone. These shafts have been up to 290 feet deep and were partially filled at some time in the past. Further filling was required for depths of up to 157 feet to fill the shafts completely.

Where old shallow mineworkings are encountered at a depth of less than 15 feet below the road they are dug out and back-filled. Where the workings are between 15 feet and 30 feet deep these are rafted over. 15,000 lin. ft. of bore-holes have been sunk in the investigation of shallow mine workings and disused mine shafts.

There are eight access points giving connection to the existing highway system: those in the locality are :-

1. A.57 at Martinscroft which is a Double-U type junction giving connections to Manchester, Warrington and Liverpool.

2. Winwick Link Junction—a two-level connection for traffic to and from the north from Warrington.

4. A.58 Liverpool Road—to give connection for traffic to and from the north only by means of slip roads.

Link Roads to the Motorway

Three new link roads are to be constructed to act as feeders to the main Motorway. Two of these connect the Motorway to the existing Trunk Road A.49 at points just north of Warrington (The Winwick Link) and just south of Wigan (The Wigan South Link) the third, viz.: The Leyland Link, gives connection to both A.49 and Leyland.

This road is just over one mile in length and it is an all-purpose road. The layout comprises dual 24 feet carriageways, a 10 feet wide central reserve and grassed side verges. Two minor roads cross the line of the link road and to avoid crossing or right-turning traffic the more heavily trafficked road is carried over the link whilst in the case of the other central reserve is carried through at the junction to permit left-turning traffic only.

The motorway in Lancashire will ultimately be provided with four service areas at Newton-le-Willows, Charnock Richard, Broughton and Forton. The service area sites are at 12-mile intervals but, in the first instance, the Ministry of Transport propose to develop full service facilities at 24-mile intervals only with highway maintenance compounds every 12 miles. The first service area to he developed in Lancashire is at Charnock Richard, where an overhead restaurant 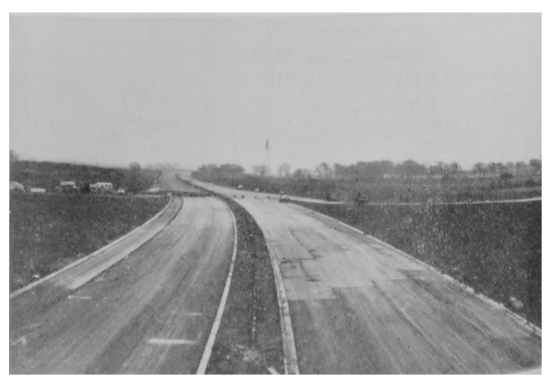 Another view of the motorway from Southworth Hall looking south 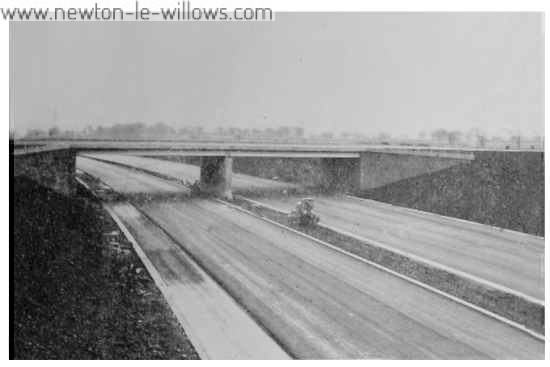 “The new motorway at Waterworks Lane”

will be provided on the motorway, together with cafeteria, transport cafes, and petrol filling stations. The overhead restaurant should prove to be an attractive feature on the motorway and the whole of the area will have careful architectural treatment to ensure that it will harmonise with the surroundings as much as possible.

Maintenance compounds equipped with garages for maintenance vehicles, hoppers, storage facilities for salt and grit. and other materials are to he provided at Rob Lane, Newton-le-Willows and Mill Lane, Charnock Richard to cater for the maintenance of the section of the motorway now under construction.

According to the August report of the contractors for the Preston/Wigan section of the roadway (The Sir Alfred McAlpine & Son Ltd., Leonard Fair-dough Ltd., Consortium) they were utilising nearly 50,000 horse power of plant, worth about £3,000,000 during the period of peak earth moving activity, and excavation output reached 30,000 cu. yds. a day.

These quantities of materials will have been used on the bridgeworks when completed :—Concrete 163,000 cu. yds., Mild Steel Reinforcement 3,500 tons, Structural Steel 7,149 tons.

Thirteen bridges are being constructed in the Winwick /Newton-le-Willows/ Ashton Section of the roadway and these are detailed on the map. 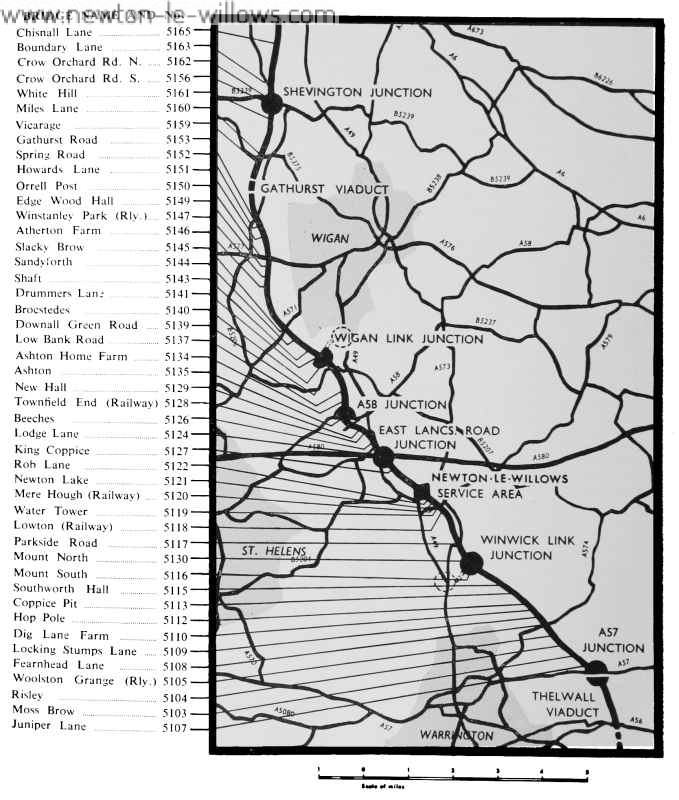 In August of this year (1962) a labour force of 2,300 men was employed by the consortium and the earning value of the contract was approximately £32,000 a day.

The information and the route map have originally been extracted from an official report compiled by Mr. James Drake, C.B.E., B.Sc., M.I.C.E., M.I.Mun.E., P.P.Inst.E., County Surveyor and Bridge-master to the Lancashire County Council. This verion of the text and photos was sourced from the Vulcan Magazine, 1962 – Vol.05, No.12 Winter Edition and was transcribed by Steven Dowd ©2007