It was then that the wealthy Quaker Joseph Sandars met William James, who proposed a railway which he undertook to build in 18 months at a cost of £100,000. Though his offer was accepted, long delays then occurred and by 1824 he was succeeded by George Stephenson as the company’s engineer.

The next year a Parliamentary Bill was introduced, but it failed principally owing to Stephensons inability to answer questions on his survey by opposing counsel. He was accordingly dismissed by the board, who appointed the professional civil engineers Sir John and George Rennie; they, with their assistant C.B.Vignoles, ensured the passage of the Bill in May 1826. The Act contained over 200 sections and was the pattern for railway Acts of Incorporation for many years. At this time the capital of the LMR was £510,000, with power to raise £127,000 more in loans. 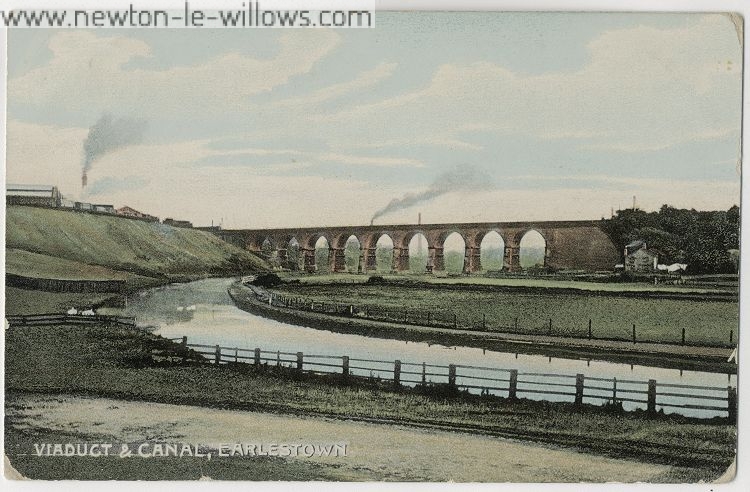 “Sankey Viaduct with the Sankey Canal below”
Stephenson was now reappointed engineer and with his assistants Locke, Allcard, and Dixon, proceeded with the heavy enginering works at Olive Mount, Chat Moss, and the 1? mile tunnel under Liverpool to the docks. In 1828 the Exchequer Loan Commissioners, who had lent the company ?100,000, sent Telford to examine the works; he was extremely critical of Stephensons methods, and of the board for allowing its engineer to act also as contractor.

The Liverpool & Manchester line had to cross the trench-like valley of the Sankey Brook.

The Sankey Brook Navigation Company objected to the building of the railway and made life difficult for George Stephenson and his team of engineers by insisting on a 60 ft clearance over the Sankey canal, to allow canal flats to pass under with sails fully rigged.

William Allcard was given the responsibility by Stephenson of designing the Sankey Viaduct and came up with a nine arch structure.

the railway is carried over the valley of the Sankey Brook, with its canal at the bottom, by a noble viaduct of nine arches, each fifty feet in the span, built principally of brick faced with stone, at an expense of upwards of ?45,000

Each of the arches is of 50 ft span and rises from massive sandstone slabs quarried locally, including stone previously quarried from the Olive Mount cuttings close to liverpool, the height of the Arches, from the top of the parapets to the water in the canal, is seventy feet, and the width of the railway twenty-five. The approach to this structure is along a stupendous embankment, formed chiefly of clay dug out of the high lands on the borders of the Sankey valley, with thousands of tons of marl and moss were compacted with brushwood used to increase the height of the embankments.