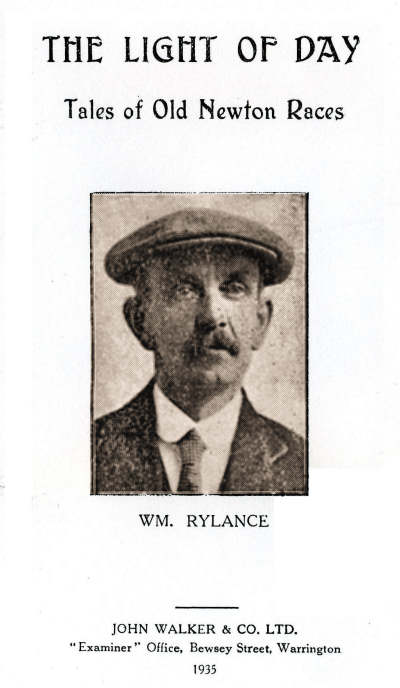 This little book, written by Mr. William Rylance, will gain in value as the years roll on. The customs he records have changed, are changing, and will continue to change; and these descriptions of what has been, presented in graphic language by one who had first-hand knowledge of the things of which he spoke, will provide reliable material for the future historian of our social life. Moreover, the stories have a present interest and worth. They cannot but make a strong appeal to all who love to read of passing events, especially when they are dressed in the familiar language and the rough-and-ready philosophy of which Mr. Rylance is a complete master.
T. W.

THE LIGHT OF DAY : Tales of Old Newton Races

IT will be fifty years ago since my father took me and several of my brothers from Earlestown to Liverpool to see a cart go along the street without a horse. When we arrived in Liverpool we were fortunate to see the so-called cart (which was, of course, a motor-car), going along the street, and everybody stopping to watch its progress until it got round the corner. Well do I remember hansom-cab drivers pointing to the car and ridiculing it as it passed by them. Dont forget, reader, to connect hansom to cab, as the present generation may think that the cab-drivers of those days were handsome. I dont say they were ugly, but you couldnt call them handsome, because of their calling. You see, they all had to wear great long beards to keep the cold off their chests. If a hansom-cab came through the streets of Warrington to-morrow I can fancy seeing the young folk stare at it, and saying amongst themselves : “Its marvellous how the driver keeps his balance on that high seat.” Compared with the low motor-cars of to-day the driver of the hansom-cab would certainly look up in the clouds. As a lad, I was always afraid of the seat of the hansom giving way and the driver falling backwards into the roadway.

I have no intention of writing here of the changes of vehicles of transport fifty years ago, I only mention the hansom-cab to prove to you that I was living fifty years ago, and I am going to try and tell you of some real and true stories of characters who attended the Newton Races of that period. Newton Racecourse was recognised as one of the finest in the country, and it was also a free course, which was the cause of the scum of the underworld visiting it. I have seen detectives take the suspects to the Police Station as soon as they landed off the train. Before I forget, I would like to mention that I went to Chester Races to try and get some material for a new story. I might as well have stayed at home ; it was no different from going to a football match. True, the bookies were there with their boards up, as of yore, shouting the odds, or I should say, trying to shout. They were not to be compared with the lads of fifty years ago, and it is a fact that when the bookies at Newton commenced their ” Even money the field, even money the field, six to four bar one, six to four bar one,” they could be distinctly heard on Bank Quay Station, providing the wind was in that direction. I think the bookies of to-day require a lesson or two on shouting, and for that they could do worse than come to Wilderspool and hear our lads on the stand (members stand) give vent to their feelings when the referee displeases. There was more life to the square yard at the old Newton Races than there was to the square mile at Chester.

On emerging from the station you were confronted with drivers of vehicles of every description for passenger carrying, except motor-cars, shouting : “Cab, sir?” “Hansom, sir?” “Four-wheeler, sir?” The cabbies kept the call up from the first train arriving in the morning.

We prefer to walk from the station to the course, just to revive old memories. Up Queen Street, then Market Street, leaving the Market Square on the right, almost covered over with side-shows, which I hope to tell you about later on, and dont forget that I am speaking of the year 1882. Fifty years ago.

As we proceed along Market Street, we pass the Police Station on the right, and St. Johns Church on the left, then the Market fields, which are now covered with houses. On leaving Market Street, which in those days was called the New Road, we enter the back line which has not been in use for sixty years at least.