Performance of the Engines.

It has been stated in several of the newspapers, by way of apology for the delay which took place in the re-turn of the rear division of the pro-cession from Manchester on the day of the opening, that it arose from an apprehension that, as night had come on, accidents might have arisen from proceeding at a more rapid rate.

The authors of this apology forget that at the same time the night came on the expectant crowds went off, and that when this dread of running people down must (if it really existed) have operated most strongly?that is, when the engines were going slowest?there was nobody in the way to be run down. Long before we reached Liverpool the railway had been completely deserted. They seem to forget, too, the episode of the Sutton inclined plane. Was it to retard the progress of the engines, and avert accidents from excessive speed, that the passengers were requested to descend from the vehicles, and make use of their own legs? Our own conviction is, that the engines did their best; and it is for a very different purpose than, the gratification of mere spleen, that we desire to know how it happened that three twelve horse power engines, assisted part of the way by two other engines of the same power, could not draw a bad of (say) 72 tons (540 persons = 36 tons and 24 carriages, each weighing 1 1/2 ton = 36) at a greater rate than 31 miles in 4 hours and 40 minutes! We seek for information, not for cause of reproach. It has been since shown by the daily work on the railway, that any one of these engines can of itself draw with ease about 14 tons at the rate of more than 15 miles an hour. How, then, was it that they proved so deficient in the present instance? We were at a loss at the time to divine the cause ; but we have since come to the conclusion, that it must have been owing to the foul state in which the rails were left by the crowds who broke in upon the railway at every part of the line after the procession had passed on its way to Manchester. It is easy to see that the friction might in this way have been so increased as to account for all the delay that took place.

Messrs. Grainger and Buchanan, civil engineers, of Edinburgh, have published in the Scotsman it particular account of two journeys which they made on the railway, 16th and, 17th September, the two days immediately succeeding the opening. We. extract the general results :–

First Journey in the train of the Northumbrian, of 14-horse power.

The above rates are exclusive of supply taken in on one occasion is the time occupied in water at different stated to have been ” hot water.” points of the route; and it is descry ” The average speed,” Messrs. G. ing of particular observation, that the and B. add, ” when fairly started, was upwards of 20 miles, and some engine was quite capable of producing of the quarter miles were performed steam sufficient to keep up this, or in 40 seconds. From what we ob- even a greater speed, throughout the served, we were convinced that the line, except on the ascending plane.”

Second Journey in the train of the North Star, of 12-horse power.

Embankment of the Sankey Viaduct.
A B shows a temporary rope lashed to the trunk of a tree, in order to secure the Engine during the night.

With respect to the effects of such rapid travelling on the passengers, Messrs. G. and B. add the following remarks 😕

“We shall only observe, that no inconvenience whatever was felt by any of the passengers, even when moving at the extraordinary rate of 20 and 25 miles an hour. The motion, on the contrary, was smooth and easy beyond any thing hitherto experienced on the smoothest turnpikes of Mr. McAdam, so much so, that we could read with the greatest ease, and even manage to write a letter. In a very short time we became quite unconscious of the rapid motion, and at the highest speed which we attained, we could observe the passengers, among whom were a good many ladies, talking to gentlemen with the utmost sang-froid. From all that we have observed, we should consider the rate of 25 miles an hour, on a level, or nearly level, road, as perfectly practicable and safe. The only source of accident that can arise, is from any sudden stoppage of the vehicles by an obstruction on the road, or by any of the wheels of the carriages giving way, in circumstances which are not likely to occur with ordinary care and attention.”

We mentioned in our last, that Messrs. Braithwaite and Ericssons engine, The William the Fourth, had arrived on Wednesday, the 22nd of September, at the Liverpool end of the line, and that we witnessed its exercising there on the evening of the 23rd.

Late in the night of the 24th, we received intelligence that this engine had, a few hours before, when on its way back to Manchester, slipped off the railway, and been all but precipitated over the high embankment which leads to the Sankey Viaduct. Feeling desirous of ascertaining, on the spot, and as speedily as possible, all the circumstances of so remarkable an accident, we gladly availed ourselves of an offer of a seat in a horse drawn railway-car, which had been engaged to take back assistance to the engine in jeopardy.

We reached the scene of the accident about day-break, and of that scene, as then presented to us, the engraved sketch on the opposite page will give a better idea than any words can convey. We have seldom witnessed any thing more fearful. But that the embankment on the left hand consisted of soft earth and sand, in which the engine at once embedded itself, up to the nave of the off wheel, it must have inevitably gone over, and, with all the persons in attendance upon it, been dashed to pieces. Had the ground been hard, or had the sleepers on which the rails are laid only protruded a foot or two farther, nothing could have averted such a catastrophe. As it was, one person only was slightly wounded, and the engine not irreparably damaged.

The report of the engineer and other persons on the engine and accompanying tender was, that they believed the accident to have beenoccasioned by some obstruction thrown across the rails ; but as it was dark at the time (about seven oclock) they could not positively assert as much. Neither had they taken any pains to ascertain, on the instant, whether their suspicions were well-founded. Some men engaged in repairing this part of the railway had left off work shortly before, and it was supposed that some of their tools might have been left accidentally lying across one of the rails. On minutely surveying the ground however?which it was admitted remained in status quo?we felt convinced there was no foundation for this supposition. The tools of the workmen were all laid out very care. fully on the outside of the embankment, and there were no broken fragments or splinters to be seen any where within a hundred yards.

What then had been the cause of the accident ? Had it arisen from any deflection or irregularity in the rails ? We took a bricklayers level, which we found among the tools, and applied it to the rails for the space of about ten yards in the rear of the spot where the engine was lying. At the distance of ten yards the outside or left-hand rail was a quarter of an inch higher than the opposite rail; at nine yards nearly level with it ; at eight yards and onwards to the engine, an inch and a half lower.

This sudden deflection at once accounted for the whole affair. The flange of the off-wheel having lost its hold of the rail, the engine, as a matter of course, slipped off, the tendency to do which was probably increased by the circumstance of the wheels of the tender (which was in advance of the engine) not being fixed to the axles, as is the case with Mr. Stephensons tenders, and ought, we think, to be the case with all carriages which have to travel on such unprotected embankments as those of the Liverpool and Manchester Railway.

This incident reporting subsidence of the rail track on the liverpool side of the sankey viaduct, is possably the reason why repair work was undertook to the railway embankment, this is just visable in one of the early 1830 prints I have of the Viaduct 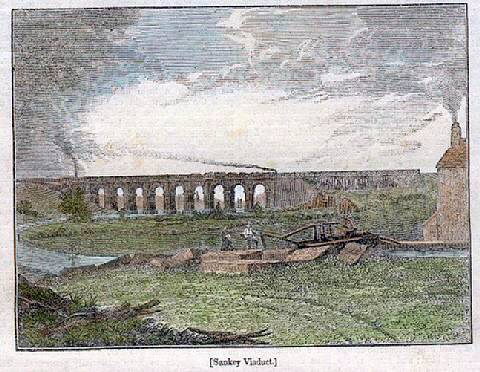 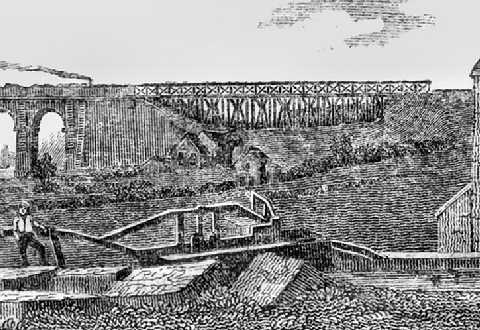 an Illustration from the “Penny Magazine, 1830”

This shows the liverpool side of the sankey viaduct embankment with the Railway tracks being held up on what look to be supporting stilts, with trains still crossing the viaduct.