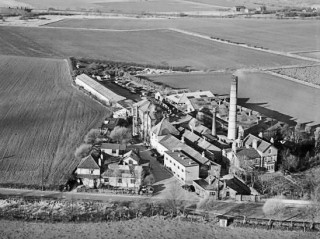 On March 13th, 1867, James and Jane Forshaw purchased the land on which the Burtonwood Brewery now stands.

James had some brewing training while employed at the Bath Springs Brewery, Ormskirk, and probably chose the site because of its position mid-way between Warrington and St Helens, and also because there was an adequate supply of suitable water readily available.

The first brewery had a 14-barrel open-tired copper, two 12-barrel Fer-menting Vessels and a cellar capacity for 45 barrels. The trade was with Free Houses, farmers and private landowners, mainly in small AVi gallon casks known as ‘Tommy Thumpers’.

In 1870 Richard Forshaw came to live with his aunt and uncle, following the death of his mother, and in 1874 they purchased their first freehold Public House, and had leases on eight other houses. They were then selling about 20 barrels a week at 30s a barrel.

In 1880 James died and the business was carried on by Richard and his aunt. They increased the number of houses owned by the Brewery, and in 1884 they were doing 40 barrels a week.

Richard took up farming in 1885 but in 1890 – helped by a small legacy from his father—he purchased the Brewery from his aunt on the occasion of her second marriage, to the Rev. Wilson, vicar of Burtonwood.

Richard married Alice Kershaw in 1887 and they were survived by four children – Tom, Mary, James and Richard.

During the miners’ strike of 1893 there was much local depression, and Richard provided free bread, potatoes and beer for the miners’ families.

In 1894 William Singleton joined the company as a brewer and, except for short intervals, he and his son Harold were the Head Brewers of the company until Harold’s death in 1964.

Bottling commenced in 1895 and, in the following year, the company won the highest award at the Brewers Exhibition for its Bottled Stout.

In 1898 Jane Wilson died—by which time 60 barrels a week were being averaged.

In 1904 the company started supplying Workingmen’s Clubs in the local areas of St Helens, Haydock, Earlestown and Warrington – the foundation of the large Club trade enjoyed today—and by 1907, when Tom Forshaw started work in the Brewery, the trade was 200 barrels a week.

By 1912, Mary Forshaw was the Com-pany Secretary and had started driving for her father. This duty increased when he was injured in the Ditton rail crash during that year.

AFTER THE GREAT WAR

James and Richard served in the army during World War I, as did John Gilchrist, whom Mary married in 1919.

In that same year, the company’s em-ployees first went to ‘The National’ – an outing which has continued until the present day.

During and after the War, Richard Snr. and his elder son, Tom, continued to expand the business of the Brewery in Lancashire and Cheshire, while his younger son, Richard Dutton-Forshaw, founded the Burtonwood Engineering Company in 1922.

After Richard Snr. died in 1930, Tom Forshaw continued the expansion into North Wales, assisted by Richard Jack-son, who served the company for 40 years.

In 1937 the Brewery was substantially rebuilt, and by 1939 it owned 138 freehold and 96 leasehold houses. Despite the restrictions of World War II, the business continued to develop, and early in 1945, 51 houses were acquired when the Caergwrle Brewery Company near Wrexham, North Wales, was purchased.

In 1946 Commander R. I. Gilchrist— the son of Mary Gilchrist—joined the company after war service in the Royal Navy, and in 1949 the company was re-named Burtonwood Brewery Co. (For- shaws) Ltd, following a reorganisation of the family holdings.

To facilitate expansion, the Brewery became a public company in 1964 and continues under the direction of the For-shaw family, controlling 300 houses in Lancashire, Cheshire, Staffordshire and North Wales, in addition to a similar number of club trade
customers.

An auction by Messrs Thomas Winstanley and Sons at the Leigh Arms, Newton- le-Willows, in September 1839 offered for sale ‘Valuable and extensive freehold estates and coal mines in the Burtonwood and surrounding area.’

The Parish Magazine ‘Excelsior’ could be obtained for just one penny in the 1920s, when the Rev. A M Mitchell was vicar, and the Church was open from 7.30 am to 7 pm with ‘all seats free, no pew monopoly and free-will offering only.’

The June edition carried the following invitation to parishioners: ‘We gather some would like to use our pages for discussion.

They will be at liberty to do so on passing the censor. The charge will be Is 6d a line with a minimum of 10s 6d.’

THE STATE OF THE ROADS

The state of the roads in the village came under the spotlight for discussion in the next month’s edition of‘Excelsior’:

‘No one having to travel on foot or by wheel on our Burtonwood roads need think of purgatory as distant in time or in space. It is their portion here and on the spot. Punctured tyres and tortured, poor sore feet are purgatorial experience sufficient to the day of any traveller. Chips on one’s plate – of the potato order – are grateful to the palate and satisfying to the appetite, but ‘chips’ on the roads – hard, sharp angular stone chips—make the corns and bunions scream with pain.’
‘Chips – spare our roads and spare our feet. Bring out the steam roller to crush, grind and level off chips! You have too many which is our experience. Our roads here in Burtonwood bear a strong resemblance to patchwork! ’

During the first week of the miners ’ strike of the ’20s, potato fields and hen roosts in the village were raided time after time by the strikers to gain food for their hungry families.

‘The club room at the Church was thrown open to our workers at play during the strike,’ the magazine reported.

‘Papers, daily and weekly, were provided, and a bright fire burned in the grate. Smoking was allowed, in moderation. The only rules were that all visitors must remember to be gentlemen, avoid roughness and protect the hall and its property from injury.’