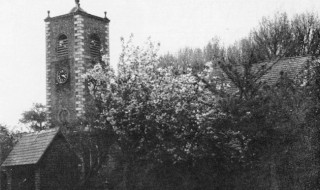 The Chapel of Burtonwood was founded by Sir Thomas de Bold in 1605, when Burtonwood was part of the Parish of Warrington. It was consecrated by the Rt Rev John Lord, Bishop of Chester, on 16th December 1634 in the presence of Richard Bold and Thomas Ireland of Bewsey.

During the Commonwealth, Burton-wood became a separate Parish, and it must have excited many of the Americans who came to Burtonwood in World War II to discover that an early incum-bent of the Church, the Rev. Samuel Mather, had sailed to America in

1635 with his father, the Rev. Richard Mather, to join the Pilgrim Fathers. Samuel returned to this country and became Vicar of Burtonwood – and probably the first American in the village!

The present building was erected in about 1716. Some of the old oak beams of the former original Chapel were incorporated in the gallery of the Church, but because of decay the gallery was taken down in 1939 – when the entire building was restored and enlarged.

By 1893 the Church was considered too small and unsafe, and efforts were made – without success – to collect £1,000 towards the cost of £8,000 to build a new church in Green Lane, Burtonwood. The top of the old tower was taken down in 1932.

In 1936 the Rev. Thomas Cowing closed the Church and held services in the Church Hall. A sum of more than £1,000 was collected towards the cost of restoration, and the old Church, which had stood for so long on the same site, was restored at a cost of £4,390. (A lot of this money was donated by Joan Forshaw). The south wall was taken down and a new aisle added. A new tower was built, in which an ancient bell and clock were placed. A new baptistry, choir and priest vestries were added in the west wing, and the interior was refurnished in selected oak, with a new altar, choir screen, pulpit, lectern and pews.

A New organ – the gift of St Michael’s, Blundellsands – was also installed. New stained-glass windows were put in on the north and south sides of the Church, and on these are shown the crests of notable families connected with Burtonwood in the past.

The Church was reopened and consecrated on 30th September 1939, in the reign of George VI, by th e Rt Rev H Gresford-Jones, Suffragan Bishop of Warrington. In 1966, as a result of mining subsidence, extensive repairs to the Church were carried out, including the complete redecoration of the interior.

Before 1784, no records were kept of burials within the Parish. One headstone at the Church bears the date 1777, but there are others, much older, which are too weathered to be deciphered.

A cemetary of two acres was formed in 1900 under the control of the Parish Council, Lord Lilford, Lieut. Col. Charles Lyon J.P. (who was Lord of the Manor) and Richard Evans & Co of Hay- dock (the chief landowners).

A Roman Catholic Church, dedicated to St Paul of the Cross, was erected in Burtonwood in 1886, and a Wesleyan Chapel was built in 1907.

Records of 1924 show that the net yearly value of the Vicarage was £294. A new and smaller Vicarage was erected in 1964 on the same site where the Vicars of Burtonwood had lived from the early 17th century.

After it was decided that the old Parish Hall in Green Lane—now demolished—was too large and too isolated to serve the Parishwell, work began in 1971 on a new £13,000 Church Hall, which now proudly stands off Chapel Lane.