This building, probably the oldest in the township, was formerly a moated grange, vestiges of the moat being visible in the boyhood days of some of our septuagenarian residents. It is said to have been the abode of the serjeant (or bailiff) of the lord of the manor, a post of great importance in olden days, and corresponding to that of sheriff of more recent times. 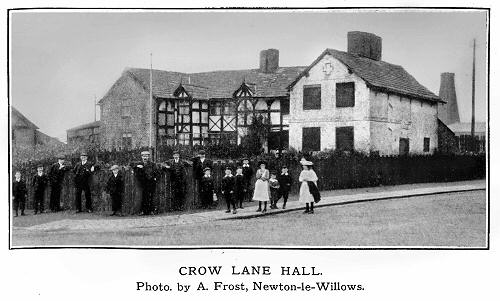 Its very probable that the Serjeants (or Sergeants as the name later became), who resided at Crow Lane Hall in the 15th, 16th, and 17th centuries were decendants of the ancient serjeant(bailiff) for the Lord of the Fee of Makerfield.

At first the holders of these personages would have been known by their Christian name and the title of the position they held, and in course of time the latter became the surname. so John the serjeant slowly became know as the person John Sergeant

In the year 1212, we find that William de Newton was serjeant, and he held two oxgangs of land by serjeanty , we may explain that serjeanty is meant that the land was held of the Lord of the Manor, not on a military tenure, but on a tenure of socage, ie. the soeman was a freeholder who held land granted by his lord for some consideration to be rendered by him, either by money or in kind, and that this tenure was hereditary. At this time we also find Robert the Reeve (Steward) holding a similar two oxgangs of land in virtue ofd his office, and Roger the Clerk holding the same. The Reeve and Clerk frequently appear in later times

In year 1292 there is a record that two sisters, Alice and Almarica, of whom the former had married Ralph the Serjeant of Newton, claimed an oxgang of land from Robert the Reeve(Steward), son of William, son of Roger de Newton. About the same time, Hugh, “called the Serjeant,” granted to Matthew de Haydock part of his land in Newton. Both Hugh and Ralph are mentioned in a later Charter of Robert Banastre

In 1479 John Serjeant of Newton granted to Peter Legh land in the Woodroffe Meadow, lying by the Sankey. Again, Henry Serjeant, who was outlawed for felony in 1528, held eight messuages, 200 acres of laud, etc., in Newton, of Thomas Langton.

Lands in Newton belonging to James the Serjeant are mentioned in a deed in the year 1315; and James was witness to another deed in 1338, he and his wife Hawise are mentioned again in 1338 and Cecile his daughter appears to have married Robert de Warrington about 1349.

In 1350 John the Serjeant and Alice his wife, claimed lands from Richard, son of Thomas de Wallwork and others , and In the following yearhe granted to feofees all of his lands in Newton, with the reversion of what his Mother Hawise held in dower.

In 1479 John Sargaunt of Newton, granted to Peter Legh land in the Woodruffe meadow, lying by the Sankey. The Woodrows or Woodruffe were still known in tyhe 18th century.

In the reign of Mary (1553-8), William Sarguant had a dispute with Sir Peter Legh, Knt. as to the title to a messuage or tenement called Crowlaynhall, its lands and appurtenances (Due. Lancs, Cal, Inquis, p.m. Vol 1).

There is also a record that a Henry Serjeant, who was outlawed for felony in 1528, held his eight messuages, 200 acres of land etc, in Newton of Thomas Langton.

William Sarguant next appears when he contributed to the subsidy in Marys reign, At the end of 1556 he confirmed the previous dispute with Peter Legh, confirming his fathers lease to Peter Legh, junior, of his capital messuage called Crow Lane Hall, from a lease dated 1534.

In the will of Gowther Legh, of Winwick, he directs “mine executors to take yearly the whole profits of Serjeants lands to the bringing up and finding to school of William Serjeant”, now heir apparent to John Serjeant and to the relieving of his brethren and sisters.

The following is an extract taken from a pleading to the Depositions of the Duchy of Lancaster, which refers to the Newton Sergeants:-

“In 1518, John Sale, citizen of London, complained that where one Henry Sale, late of Bedford(Leigh and Bedford) in the county of Lancaster, deceased, his brother, was siezed, in his demesne as fee of six messuages and 400 acres of land, with apputenances. IN Bedford, which he held of Thomas Boteler, Knight, by Knights service, and when the said Henry had issue, Margeret, his daughter and heir, who at the time of his death was aged 4 years, by force whereof the said Sir Thomas siezed the body of the said Margeret as his ward and entered into the premises, and being thereof possessed for the sum of £40 sterling to him paid by the plaintiff. Sir Thomas sold the wardship and marriage of Margeret, and also all the custordy of the lands to John Bothe, or Barton, and Roger Ashowe, who were put in trust by the plaintif to make the bargain to his only use. These two gentlemenn, with the consent of John Sale, the plaintiff, by an indenture dated 12th July 1518, sold to William Sereant, of Newton in Makerfield, Henry Sergeant and his wife Joan, the wardship marriage and custody of Margeret untill she attained the age of 14, they paying the plaintiff for the same the sum of 130 marks. John Sale died befor the money was paid, and a claim was made for the balance”

Peter Serjeant was in 1592 found to have held lands in Newton of the Queen, Thomas, his son and heir was 9 years at that date.

In 1660, a fee rent of £1 13s was due to the Lord of Newton from the fee of rent of Peter Serjeant. Margeret, daughter of Henry Ashurst of Dalton married Peter Serjeant on Newton, Administration was in 1673 granted to the estate of Thomas Serjeant of Newton.

Crow Lane House, very probably the hall above mentioned, was in 1673 sold by William Blackburne, son of Thomas of Blackley Hurst, to John Stirrup, of Newton, and about forty years later it was purchased by Peter Legh, of Lyme.

The family of Serjeant remained in Newton down to the close of the 17th century.

The property, together with the plot of land to the west of Gas-street, containing the Bottle Works and the old and new houses, is leased by Messrs. Pilkington Brothers, of St. Helens.

The unoccupied portion of the hall was tenanted some years ago by Mrs. Boulton as a provision and grocery store; the western portion and out-buildings are in the occupation of Messrs. J. Markland and Sons, wheelwrights, and the middle portion is tenanted by Mrs. Smith, whose five sons have shown their loyalty to King and country by joining the Forces. S

The probability is that “Crow House” and farm were granted to some cancellarius (porter, janitor, door-keeper, waiter in the Kings court), by the King as a gift of the Crown, to the original holder, as a petite sergenterie, which Littleton defines thus :

“Where a man holds his land of our sovereign lord the King, to yield to him yearly a bow, or a sword, or a dagger, or a knife, or a lance, or a pair of gloves of mail, or a pair of gilt spurs, or an arrow or divers arrows, or to yield such other small things belonging to war,”

and was held direct of the King and his person, and not of any honour or manor, and was not linked or tied to any manor (though it adjoined the Kings demesne) ; and this tenure is said to be a tenure of the King as of his Crown that is, as he is King. And so, when it escheats (as for treason), it reverts to the Crown, as I think it did, and was afterwards bestowed upon the wife of King Henry VIII. (Catherine Parr).

Also note that “a man cannot hold by grande sergenterie nor by petite sergenterie, but of the King.” Further, “if a man holds land of the King, to find a horse of such a price and a saddle and a bridle by forty days, or any other time, when the King goes with his army against Wales, this is petite sergenterie, and not grande sergenterie (which carries other feudal obligations) ; and such service is but socage (of the plough) in effect, because that such tenant by his tenure ought not to go, or do anything, in his proper person, touching the war, but to render and pay yearly certain things to the King as a man ought to pay rent.” But the dignity of the person of the King gives the name of petite sergenterie, which, in case of a common person, should he called plain socage of which see “Coke upon Littleton,” lib. ii., chap. ix., secs. 159, 160. 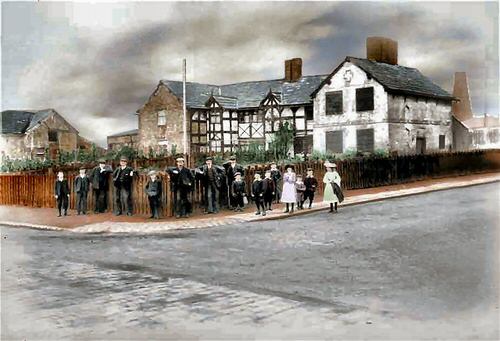 Same photo as above, but from another source, which I have given some colour
This would not prevent the petit serjent from being both bailiff and sheriff for the lord of the manor (as they were one and the same thing at that time) in Norman French le bailie o. le reeve. In modern French bailli is bailif (magistrate), bailiff: reeve (obsolete French) is bailli. The change from “house” to “hall” took place at that time.

Hall is palais de justice. Moreover, in the old Moat “House” he would have means of keeping those committed to his care in “safety.” “Baily” was an old Saxon word, and signifies “a safe keeper or protector,” and baffle or ballium is “safe keeping or protection,? and the sheriff is called ballivus, and the county balliva sua. In medieval French the word serjeant meant a servant; in the 13th century it was Sergenx, from Latin serventem. It is mentioned in A.D. II9I.?P. M. C.

The Crow-lane House Farm across the road, now tenanted by Mr. John Knowles, was probably one of the afore mentioned messuages belonging to Crow Lane Hall.

During the short tenancy of Mr. Cawley, we were shown over the premises by him, and quite recently we visited the barn and copied the following neatly-carved initials and date on the old beam:-

W M K M I M 1680
The initials are evidently those of three members of a family whose surname began with M, and the date corresponds with the apparent age of the building. The old thatched cottages near have quite as old an appearance as the farmhouse and barn. Between these cottages and Cross-lane was a small quarry, from which, as we have already stated, the stone was obtained to build the late Stone Row, off Gas-street. This quarry-hole was filled with water, and was known as Jacques Pit, pronounced locally Jac-cus Pit.

“In my boyhood days the Crow-lane House Farm was tenanted by Ambrose Bate, brother of Richard Bate who kept the Oak Tree Inn. I knew all the family, and, up to the time of my leaving Cross-lane, I got butter and milk from them. Anyway, whether John Stirrup had the land or only the hall, it bears out my opinion that the land was confis?cated. Only, the farm is on the opposite side and would adjoin “The Demesne.”?P. M. C.

This text is taken directly from the 1916, C. Cole, History of Newton le Willows, and the 1916 Vol II, Newton in Makerfield its History, by J H Lane, notes in this text are also from Peter Mayor Cambell, who contributed vast amounts of information into the 1914 / 1916 J H Lane Books.

Formatting and editing in this transcription are by myself, Steven Dowd