I do not guarantee that my transcription doesn’t include some pretty basic mistakes, apart from my poor typing ability and bad spelling, some pages were very marked making them hard to read.

I hope this transcribed text will be well received, its easily searched with the find on page facility included with most any web browsers from the browsers edit menu.

There are two sections to this article, Newton-le-Willows is the top one, and Earlestown is the lower one, Hope you find them useful. 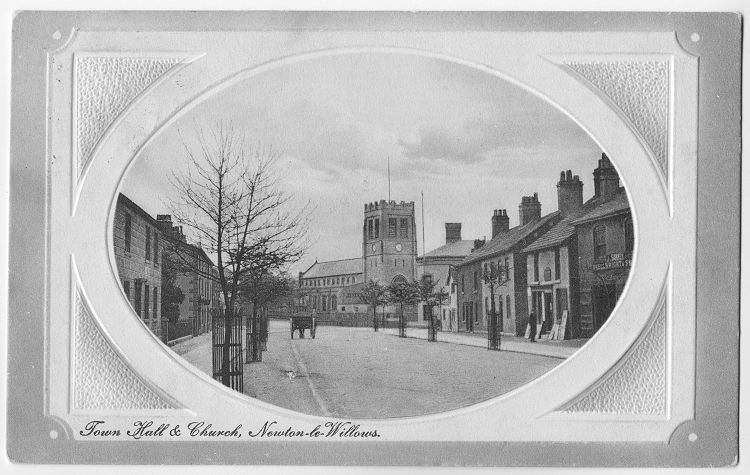 NEWTON-LE-WILLOWS (otherwise Newton-in-Makerfield) is a township and parish on the road between Warrington and Wigan and on the Liverpool and Manchester railway, with two rail stations, one at Newton Village named Newton Bridge, and another at the opposite side of the parish at the township of Earlestown, and is 188 miles from London, 14 miles south-west from Bolton, 15 3/4 miles east from Liverpool, 15 3/4 miles west from Manchester, 5 miles east from St. Helens, 5 1/2 miles north from Warrington and 7 miles south from Wigan, in the Newton division of the county, hundred of West Derby, petty sessional division of Warrington, union and county court district of Warrington, rural deanery of Winwick, archdeaconry of Warrington and diocese of Liverpool.

The railway is carried over the valley of the Sankey by a magnificent viaduct of nine lofty arches, that which sans the canal being 63 feet above the surface of the water.

The township was formerly governed by a board of Improvement Commissioners, but under the Local Government Act of 1894 has now an Urban District Council. The township being divided into five wards each having three representatives.

Newton returned two members to Parliament from the first year of Queen Elizabeth (1558) to the passing of the Reform Act in 1832, when it was disfranchised : it comprises the a ecclesiastical parishes of St. Peter, Emmanuel and St. John the Baptist, Earlestown.

The parish church of Emmanuel, erected A.D 1841, is a stone building in the Early English style, consisting of chancel, nave, west porch and a small tower with spire over the western entrance containing one bell: there are 560 sittings. The register dates from the year 1842. The living is a rectory, gross yearly, value £300, average £242, with residence, with about an acre of glebe, in the gift of the Earl of Derby G.C.B., P.C. and held since 1892 by the Rev. .James Carson M.A. of Trinity College, Dublin, and surrogate. The population of this ecclesiastical parish was in 1891, 1,899 persons.

The Catholic church in Crow lane, dedicated to St. Mary and St. John, and erected in 1864 at a cost of about £7,000 from designs by Edward Blount, of London, is a stone building in tile Gothic style, consisting of apsidal chancel, nave, aisles and a tower with spire 120 feet in height: it will seat 600 people, and there is a cemetery attached to the church.

There is a Wesleyan chapel in Cross lane to seat 600. The cemetery of 8 1/2 acres was laid out at a cost of £5,000 by the Newton-in-Makerfield improvement commissioners, from plans and designs by Mr. Richard Brierley C.E. ; and a chapel, lodge and mortuary were erected in 1885.
The poor have, £10 yearly on St. Thomas day in clothing. The Dean School Trust, value about £80 yearly, is awarded to four scholars upon examination, open to all the elementary schools of Newton Township.

There is a foundry belonging to the Vulcan Foundry Company Limited, which gives employment to about 760 hands: the railway and general printing and stationery works of Messrs. McCorquodale and Co. Ltd, employing about 500 hands; and the paper mills of Messrs. Gillespie and Mason, employing about 200; two glass making establishments and other industries, and in the neighbourhood are the collieries of Richard Evans and Co. Limited.

The Newton club, in Park road, was established in 1872 and has 35 members.

There is a Town Hall in the High street, at which a committee of the guardians of Warrington union, consisting of the elected guardians of the townships of Burtonwood, Haydock and Newton, meets alternate Thursdays at 4 p.m. to administer relief. A working mens club meets at the Town Hall, where there is a news room and there is also a cricket club.

Fairs are held on the 17th May and 11th and 12th August, principally for horses, horned cattle, and sheep and pigs.

There is a race course of 80 acres in extent, the property of Lord Newton D.L, J.P.; races are held annually about the last week in May or first week in June. Lord Newton D.L., J.P. is lord of the manor of the barony of Newton and fee of Makerfield, and is also the principal landowner. Courts leet are held occasionally.

The Liverpool Farm Reformatory School, the buildings of which are the property of the Liverpool Corporation, was certified April 12, 1859, and receives boys sent under the Reformatory Acts; it is one of the schools managed by the Liverpool Juvenile Reformatory Association, and the school is available for 150 boys; 33 acres of land are cultivated as a farm and market garden and there is a corn mill driven by water.

County Magistrates
Usually sitting here for the petty sessional division of Warrington, are same as at Warrington.

Petty Sessions are held at the Town hall the second & last Saturday in every month at 10 a.m. The following places are included in the sub-division:-Burtonwood, Golborne, Haydock, Newton, Southworth & Winwick

Places of Worship, with times of services.

EARLESTOWN is an ecclesiastical parish, formed May 17, 1879, from the civil parish of Newton-in-Makerfield, midway between Manchester and Liverpool, 4 miles east from St, Helens, 4 1/2 miles north from Warrington and one from Newton-in-Makerfield, with a junction station on the London and North Western railway, in the union and county court district of Warrington, rural deanery of Winwick, archdeaconry of Warrington and diocese of Liverpool.

The church of St, John the Baptist was consecrated and the district assigned In 1879: the building, erected in 1878 at a cost of £8,000, is in the Early English style, consisting of chancel, nave, aisles, transepts and a western porch: it will seat 600 people.

The register dates from the year 1879. The living is a vicarage, gross yearly value £200, with residence, In the gift of the rector of Newton-in-Makerfield, and held since 1879 by the Rev. Thomas Roberts Matthews, of St. Bees.

There are Primitive Methodist, Wesleyan and Welsh methodist chapels. A Mechanics Institute has been erected at considerable expense by the London and North Western Railway for the use of their workmen, comprising lecture hall and dinning rooms capable of accommodating from 600 to 800 persons.

A market is held on Friday.

The London and North Western Railway Company have a large establishment here for building their waggons, and employ about 1,200 hands, and the sugar refinery of the Sankey Sugar Company is situated near.

WARGRAVE is a village about a mile from Earlestown.

VULCAN is a village, close to Wargrave, and on the London and North Western Railway, between Earlestown and Warrington, consisting of a large number of cottages, Inhabited by the employees of the Vulcan Foundry Company Limited, from whIch the place derives its name.

COLLINS GREEN Is a portion of Burton Wood 6 miles northwest from Warrington, and has a station on the Liverpool and Manchester section of the London and North Western railwayHere is a colliery, the property of the Collins Green Colliery Company Limited.