This Shows the location of the Glass Works In relation to Crow Lane, The Glass works (red) stands on the site where we know have the Fire Station, Opposite is the Brick Works, Windy Bank House (blue) is still standing, but all of the Glass Works or its Railway line are both long gone. 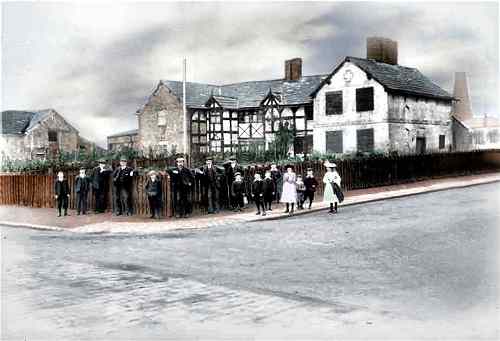 This as far as I can tell is the only image that exists that shows anything of the Glass Works, you can see to the right of this image, in the distance the bottle shaped kilns of the glass works. This scene shows the Crow Lane / White Cross Hall which stood where today we have the DHSS prefab buildings. the red arrow on the above map shows the direction which this view is looking.

The Removal of British Competitors by Pilkingtons & Co
William Pilkington in a letter approx 1853 to Chances of Birmingham, makes it clear that Pilkingtons and Chances had between them aquired the Old Swan Glassworks after they had been put up for sale in 1851, he writes ” Would you in such a case, contribute in such a way as we do with the Old Swan Works already, that is pro rata so long as the remainder of the works continues silent”. The factory to which this letter concerns itself is the Newton-leWillows Glassworks a few miles from St Helens, It was this particular purchase which led Chances, Pilkingtons and Hartleys, together with three smaller concerns, to share the cost not only of this aquisition but also of the earlier closures.

The Newton works, built in 1832, had started to make glass the folling year, The Newton Works eventually passed into the hands of Mr William Stock, a known Liverpool glass merchant, In this particular Newton Glass Works venture William Stock appears to have been in partnership with a Mr Robert Gardner, whome its noted that William Pilkington describes as “a thoroughly go-ahead Manchester man”

The two new proprietors extended the works which by the close of 1854 consisted of Two Crown Glass Houses and One Sheet Glass House, these were capable of producing 7,000 tables of crown and 4,000 pieces of sheet glass per week.

This company was obviously a most serious competitor to Chances, Pilkingtons and Hartleys, the more so because the go-ahead manchester man , Robert Gardner was reported by William Pilkington to have sounded the economic standings as being “the more he makes, the cheaper he gets it”, William Pilkington also conveyed the sad news that Rober Gardner had “a strong antagonistic feeling against the Glass Trade and its members, which he says he willpurge if he stays in it”.

Unfortunatly Robert Gardner lacked the knowledge to fight in this trade on his own, he admitted himself that he was “as ignorent of the Glass trade as with the pen I now write this”, this meant he had to rely heavily on his partner William Stock. However by 1855, the two proprietors were drifting apart. William Stock was putting up another Glass Works at West Leigh, only a few miles away, and Robert Gardner confessed that he had lost all confidense in him.

It was under these curcumstances that William Pilkington urged his fellow manufacturers to buy out “the most formidable enemy that we have ever encountered”.

On 4th July 1855, it was agreed between Pilkington and Gardner that ?12,000 should be paid for the works, plus and additional ?2,500 for the furnaces, all materials apart from finished glass to be taken at valuation. A week after this agreement was reached representatives of Chances, Pilkingtons and Hartleys met at The Great Western Hotel in London, and agreed to bear joint responibility not only for the purchase of the Newton le Willows Factory, but also for the Tyne and Tees, Old Swan and Bagot Street Works, the whole scheme depending upon the successfull accomplishment of the Newton agreement of 4th July. They invited three other Window Glass firms – Swinbourne at South Shields, the Wearmouth Glass Company and the Nailsea Glass Company (Bristol) – to join them in this agreement.

Little time was lost, and Two days after the London meeting, Swinburne and Matterson (of the Wearmouth Company) agreed to collaberate in the plan, and as soon as the following day James Varley, the Pilkingtons book-keeper wired Chances with the news: “Newton is Shutup, We Have possession. Our own manager has charge of the furnaces six p.m”.

There were hitches in the valuing of materials at the works and these caused James Hartley to complain bitterly against William Pilkington who he believed was “temporising for his own ends”. But when all the facts were explained to him, he agreed that it was Robert Gardners solicitors who were at fault.

There is no evidence how or when the whole matter was settled, but it is certain that the Newton Glass Works from this period never made anymore window glass, and from this we may infer that the manufacturers agreement was eventually carried through.

This information comes from “The Glassmakers” by TC Barker, published by Weidenfeld and Nicolson, London, 1977 ISBN 0 297 76909 x page 106. This book is based on the information in the records of the Pilkington Archive, post 1855 history isnt available in the book as Theo Barkers account for the Newton Works in “The Glassmakers” finishes with the words “Unfortunately our documents cease at this point”. With price-fixing cartels It might be seen as surprising that any records at all were kept. After the closure of Window glass production thereafter the works only made bottles.

Another Account of The Glass Works
Another book on Newton le Willows by John Henry Lane , Published in 1914 included notes and reminiscences from a Mr Peter Mayor Campell, Parts of the following are edited extracts based around details from the reminiscences of the Glass Works.

Glass-making seems to have started in Newton approx 1832, as a consequence of the opening of the railway.

Mr Robert Davies, solicitor of Warrington, inherited the property of the Newton Glass Works from his father, who was the first proprietor, and sold it to Messrs. Ackers, Abraham and Co.

In 1848. Ownership of the Glass Works passed from Messrs. Ackers, Abraham and Co., to Messrs. William Stock and Son.

In 1851 Messrs. William Stock and Son., built new furnaces and the chimney with that date on it. They introduced the manufacture of German sheet glass, for which purpose they obtained the services of some Belgian glass blowers from either Charleroi, Gosselies, Jumet, La Louvi?re, or Mons – great centres of that industry – and who spoke the Walloon patois and French.

This for a time secured the trade to the Messrs. Stock, but ultimately led to a deplorable quarrel between the English and the Belgian workmen, and the manslaughter of an Englishman named Rose, who had lived next door but one to me in Crow-lane, opposite St Marys. Rose was in the wrong, for I saw nearly the whole affair, which tool place in Spurrs public-house, the Old Crow Inn, and was the result of trade jealousy, for the Belgians came under contract and earned very good wages.

Messrs. William Stock and Son asked Peter Mayor at the Tilery on the Opposite side of the road from the Glass Works, to make a million bricks for them, to meditated great extensions to the Glass Works premises, but the project failed, either through the depression in trade caused by the Crimean War or the pressure put upon them by the St Helens companies.

Which ever caused the projects abandonment it meant that Peter Mayor at the Tilery had half-a-million bricks thrown on his hands, these were sold to the arbitrator for eight shillings a thousand, and found there way into the foundations of houses then being built for the Railway Company in Earlestown.

At that time I was in my uncle Mayors brick, tile, and pottery office, which was opposite the centre of the Glass Works Row. These houses were being built when the glass-making started in 1832, as a consequence of the opening of the railway. In 1857 I left my then employment and was offered a situation in the Glass Works office by Mr. James, who was at that time the manager. While I was yet a mere boy I used to run in and about the Glass Works, and saw all that was going on in it.

Next door to us in the High-street (after the Shaws left) lived the Wallaces, glass-makers who came from Newcastle, and, with whom we kept up an intimacy after they went to St Helens, and with the Locharts and McCulloughs.

I knew Barnes, the potter, and often watched him building up pots for the glass-metal.

I also watched the Belgians swinging the huge pieces of it their punts in the air and in the pits over which they stood – in fact, I saw the whole process of glass-making, cutting, packing, and despatch.

At times there was a congestion, but that ceased when the branch line from the colliery was changed from the front to the back of the houses in Crow-lame and modernised.

For a time the works were closed. Messrs. William Stock and Son, however, continued the trade in the works at West Leigh for other ten years, having spent a fortune in building expensive furnaces.

In 1857 Mr. T.S. Beasley, of Manchester, tried to revive the trade, but in the same year assigned his interests to Mr. Robert Gardiner, who in turn assigned them in 1861 to the St Helens Crown Glass Co., who promptly closed them and effectually prevented further competition.

About the same time the Plate Glass Works in Sutton closed as a result of competition. In the interim, while the works were at a standstill, the dwelling-house and garden of the manager were tenanted by a commercial traveller named Robert Taylor, whose business lay in the Manchester district. His two daughters were in the Congregational Church choir, and the youngest of them was one of our first sopranos. I frequently visited their home, and on one occasion was shown a stained-glass window that was said to have been one of the manufactures of the first glass firm there.

Mr. Borron was afterwards joined by Mr. John Little, of Glasgow, as partner.

I was well acquainted with Mr. Little and family, and his younger son Alex was in my office for a twelve month period.

Mr. Borron I also knew from living in the next house to him in the enclosure before Wargrave Church, and my very last service was to do some translation in connection with his glass bottle business. Long may it flourish! I also saw the fire in 1883 that destroyed two of the warehouses.

Sections of the text are extracts from:

Newton in Makerfield , Its History, by John Henry Lane , Published in 1914

The TimeWarp HomePages of John Rouse, The Peter Mayor Campbell mentioned in the above text is his wifes great-great-grandfather.

Thank you to all for use of the texts.