At this period the wages of an agricultural labourer were 10d per day without food, and 5d if his master provided him with meals. Carpenters and masons received ls 6d per day. The wants of the people, however, were few, and food was cheap, and a shilling had greater purchasing power than it has in the present day.

In the early part of the 18th century the manufacture of woollens and of silk was encouraged, to the detriment of cottons and calicoes, and made rapid strides. Probably about this time these manufactures found employment for many people in Newton.

Pit coal took the place of wood in the smelting of iron ore, and steam, as a motive power, was not then used. The people were independent and rough, the criminal law was severe and people were hanged for trifling offences. Travelling was done by stage coaches and by wagons, the latter taking a fortnight to journey from York to London. It was not until 1784 that the first mail coach appeared on the road.

From the Estate Map of Newton, prepared in 1745 by the then Surveyor, Mr. Benjamin Yoxall, who built the house in Rob Lane on which he left protruding bricks to form the letters B.Y.H., the initials of himself and his wife (Hannah) as was common in those days, it appears that a road passed round the Newton Chapel—quite a small building in those days—and in the churchyard, almost facing the present Vicarage house, are shown several small cottages. The Parsonage stood on the roadside, and more than a century afterwards became the residence of Col. George McCorquodale, who had it enlarged, and later still, in 1897, after further alterations, it was made into two residences, called The Priory and The Willows, the former being the old portion of the house. It is very probable that the parsonage was at one time the residence of the Lords of the Manor, for on ground adjoining the Chapel and the Parsonage stood the Manor Court-house (afterwards the school) and the Manor Pinfold, and probably, centuries earlier, the Baronial Castle. 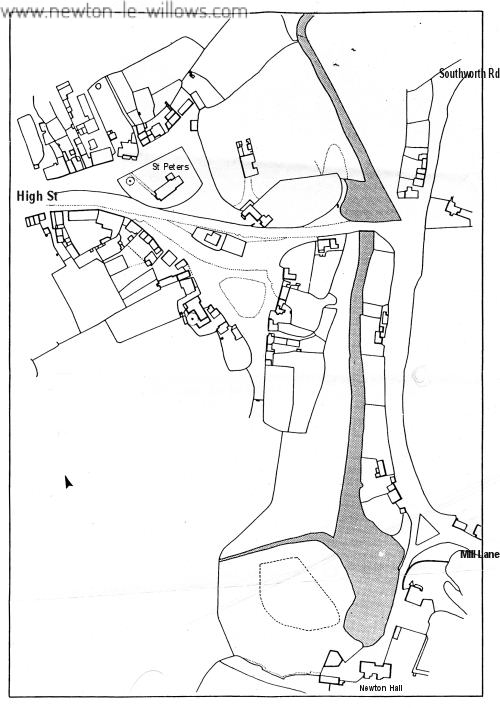 As regards this Pinfold, or Pound of the Manor, stray animals were impounded until bailed out by their owners, who thus had to pay a fine for their carelessness. Between the years 1827 and 1845 this Pinfold was removed to the site of the old Quarry near the Pump in Southworth Road (opposite Mere Road) which site was so used until the year 1878, when the land being required for another purpose, the present Pinfold, adjoining Brooks’ Square, in Ashton Road, was built.

The Parish Stocks are also shown, as well as a large and apparently handsome Cross, from the steps of which doubtless all public’ announcements were made. In later years the Obelisk took the place of this Cross—upon the actual site—and after this Obelisk was removed, the site became the family graves of Mr. Frost and Mr. Crouchley, the foundations of the Obelisk (and probably of the Cross) being removed when the ground was opened.

No Cockpit is shown on the Map. The road we know as Church Street bore to the left and came out in Southworth Road, somewhere near to the road leading to the Goods Station. On the 1827 Estate Map there is also shown the present road leading to Mill Lane, with two separate and distinct plots of land between this and the old road, the latter being closed in 1854. There were then (in 1740 several houses in Church St., viz. : One or two cottages on the right baud side of the road from the Chapel, where the cottage opposite Willow Road now stands; Mr. C. H. Clark’s house was there; an old black and white house stood where Kirkfield School now is, and another old house adjoined. The Horse and Jockey Inn was then known as The George Inn, and was kept by John Ellam together with the Assembly Rooms.

In High Street there were several houses, some of which are now standing, viz.: the black and white house (dated 1600) occupied at the present time as a Confectioner’s shop, Stone-Legh, the white thatched cottages opposite the Police Station, and some which stood upon its site, also those at the corner of High Street and Crow Lane. There were other houses here and there in the street.

Oak Tree Hall (or House), which is supposed to have stood on the site of the Oak Tree Inn, is not shown on the Map—it must have been demolished before 1745. It was a fabric of timber work, and at one time belonged to the Bretherton’s of Hey. (Baines.) The field upon which Brooks’ Square was formed was, however, known as the Oak Tree Meadow before the Inn existed.

Crow Lane was there practically in its present form, though perhaps somewhat narrower, for in those days the roads were seldom made sufficiently wide to allow carts to pass each other, and fences there were none. Mr. Longton’s farm-house (Fairbrother’s Farm) is shown, also Crow Lane House or Hall, then occupied by Jo. Jenkins and Mr. Markland’s premises, which at that-time, were the outbuildings belonging to the Hall. Crow Lane Hall existed prior to 1556, when it was known as Crawe Lane Hall, and the road was called Crawe Lane. The Hall is probably the oldest existing house in Newton. (See article on Seargeants of Crow lane / Crow lane Hall). .

Ashton’s Cottages are shown, and the farm-house opposite Crow Lane Hall, Mr. Lunt’s farm-house, and the one (Yew Tree Farm) near Vista Road occupied by Mr. McClymont, are also shown, as well as the old cottage at the corner of Vista Road and the farm-house in the Dingle (Heald Farm), off Legh Street. There were also various cottage, and small farms round the Common, some of which still exist. Crow Lane went across the Common and over Penh-ford Bridge practically as now. Cross Lane was then but a narrow lane running along to Bradley Mill, where there was a Forge. One part of the lane was known as Pepper Alley.

Ashton. Road (or Coalpit Lane) was there, but it was very narrow in places. Rob Lane led to the Dene School. It, too, was narrow, and according to the plan, its line has since been slightly diverted in places. There was no road to Golborne, only a bridle path across the stream. There was a Corn Mill which afterwards became, so we are informed, a Cotton Mill, opposite the Dene School, which school was occupied at one time as a Silk Weaving Shed, and in the Hollows were several cottages, in which the weavers lived.

Mill Lane, a very old road, is shown with cottages on either side of the Mill Dam. Then came the Mill, with a Malt Kiln close to, and Newton Hall. Winwick Road came past the Red Bank Mill (once used as a Cotton Mill), close to the site of the Reformatory. The road was diverted about the year 1810, by Mr. Thomas Legh, at his own expense. Southworth Road was then but a lane in the same position as the present road, the continuation past Lowton Station being of later date. The old road turned round by the present “Bull’s Head” Inn until it reached the old “Bull’s Head” Inn (now a cottage), when it branched off (from the Warrington and Wigan road) to Lowton.

The first mention of Park Road is on the 1827 Map, when the road (a narrow one) came out into Church Street, about mid-way between the Church and the Bridge—somewhere near where Willow Road now is, and accounts for the railway bridge not being square with the present road.

There was no district of a Wargrave, although there was Wargrave (or Wargry) Moss, and no Earlestown. Old Wargreve, the former residence of the Brethertons, was there, and probably occupied by a member of the family.

Parkside and Pipers’ Hole districts existed in 1745 practically in the same state as now, except that Woodhead Farm was not built, and there were one or two more houses in Barrow Lane.

In the whole of Newton there were in this year (1745) but 147 houses, and of this number 25 were in the localities now known as Earlestown and Wargrave. The population would probably be between seven and eight hundred.

The Lord of the Manor was Peter Legh, Esq. (of Lyme), and the Parliamentary representatives Mr. Legh Master (of New Hall, Ashton-in-Makerfield) and Mr. Peter Legh. The Rev. Philip Naylor was probably the Parson.

In these old days probably the majority of the men earned their livelihoods on the farms, seldom venturing but a few miles beyond the township. Save for the intercourse which they might have with travellers on the coaches, and with those who came to the markets and the fairs, their knowledge of outside events was limited. In times, however, of national excitement, when the beacon fires shone round about, their thoughts and interests strayed far beyond their usual circle.