THE FABLE OF THE INSPECTOR AND THE BOLTS

There dwelt in the City of Newt an Inspector of a Factory, and his Chief spake unto him saying:- 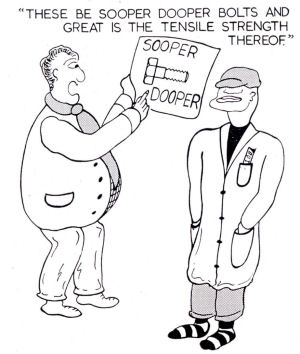 “Lo, there is in the wilderness of Vul a maker of bolts, and he has made two score and five special bolts. These be Sooper-Dooper bolts and great is the tensile strength thereof, that they may fix, even the very top of a cylinder casing, even unto the very bottom.

Get thee hence and inspect them.

And take micrometers and things that thou shalt need, and gauge them unto within the widenesses off a certain part of a gnat.

For I say unto thee, if thou shalt release them and they be found wanting of strength, then I will tear a strip off thee.

Yea, if the bolts be not properly inspected, then will I cause a great misfortune to fall upon thee.”

And the Inspector who was a sound bloke spake thus:-

“O.K. O Chief. That which is asked for by Drawing and Specification, shalt be done.”

And thus the Inspector departed and journeyed unto the sheddy domain of the maker of bolts who spake unto him saying:

“Here they are Charlie. Want a six-insh-rool?” 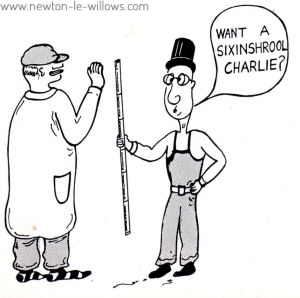 But the Inspector chided him saying:-

“Nay, before I measure them, do command your servants and your hand-maidens, that they may deliver unto me, all the paper-works there-unto related.”

Then there were carried unto him one hundred and fifty-nine scrolls, which were the Release Notes and the Test Certificates for the raw materials and the M.S.L. Certificates of the fiery furnace in which they did heat and treat the bolts, and the Calibration Charts for the hardness machine in which they did test the bolts, and a host of Certificates of Accuracy for the tensile and Izod machines in which they did stretch and smite the test pieces. And there was also brought unto him a dog licence, a copy of the Factories Act and a Pools coupon, which were included amongst the papers in error. And they delivered unto him also many M.S.L. Certificates relating unto the Wick-ham Gauges used upon the Bolts. There were also Certificates of Chemical Analysis and Radiological Reports and Inspection Records and many other reports of strange and wonderful things of which none knew the meaning. And they brought a copy of the order and a set of drawings and a Pyrometer Record Chart which was fifty cubits in length and a multitude of other things too numerous to recite. 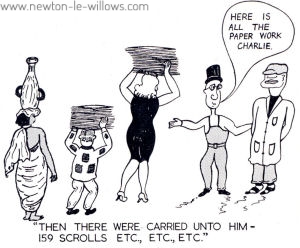 For twelve days the Inspector looked upon these things, and on the twelfth day he said that the scrolls, they were good. Then, and only then, did he measure the bolts, and all the dimensions thereof were according to Hoyle. And he nut them into strange potions, and he tested them upon a machine of Magnaflux. And he performed Rockwells upon them all and some he rubbed with a precious jewel. Then he cast his eye upon them through a microscope, a horoscope, a telescope, a periscope, a stroboscope and other strange devices. And he did project the threads upon a screen and gazed upon their form, and it was fair. And he gauged the threads by the law of Go and Nogo. and the law of Best Cylinders. And from one bolt which seemed doubtful he did cause a test piece to be made, and great was the tensile thereof and Izod and the Elongation were fair to behold. Then he caused X-rays to shine upon them lest there be concealed weevils inside them. These things and many others which are in the Sacred Book did he perform with great cunning.

And when all these things had come to pass it was the evening of the nine-teenthish day and he made out a release note and inscribed therein all the necessary details. And he signed it and put his stamp upon it, and upon the bolts also.

Then he spake unto the Bolt Maker saying:-

“I do declare this hatch of bolts to be pretty ruddy good. Despatch them forthwith unto the Factory and if they bounce, then I shall eat them without salt.”

But Lo, it came to pass that they were rejected.

They had been fashioned to an Olde obsolete issue of the drawing.

And the grief of the Inspector was terrible to behold. 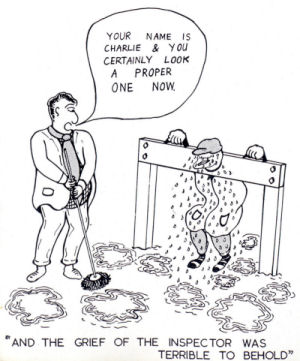 This text is transcribed by Steven Dowd from original material, published by the Vulcan Foundry Works LTD, 1958

This transcription, its errors and omissions are my own transcription from the original published text and are copyright steven Dowd, if you plan to use this text on your website, please inform me before use.