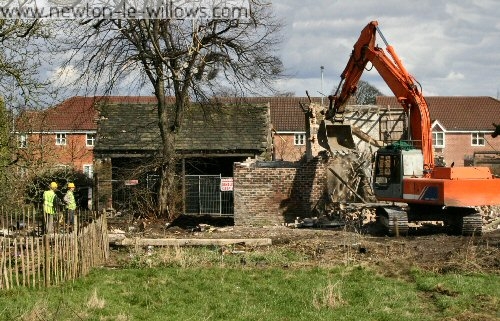 The odd thing is, this was all happening right besides my house, I was overlooking the whole archaeological evaluation. It was like having my own personal Time Team, right next door. The house beyond this evaluation trench is my own humble residence.

I may have to revise this text later if my understanding of the evaluations prooves wrong, but as I understand it, the archeaologists were looking for remains of the Roman Road and also a Tannery, from published information and local maps from different periods its well known that the Farm has changed its name over the years, originally being known as Tan House Farm, and more recently Holly House Farm, I have scanned a few sections off old maps, some of which clearly which show field boundries, buildings and the farm as both names. A Newton Survey of 1759 records a Tanyard, and Listed with it are quite a few fields (Nearer Meadow, Higher Meadow, Lower Meadow, Three Acre, Study (?) House Field, Midle (sic) Field, Little Black Hey, Great Black Hey, Two New Heys, and Walkers Croft) also listed are a house and garden. The tithe map of 1839 lists “Tan Yard Meadow” immediately to the south of the Holly House Farm site, and the field names to the west (Lower House Field, Higher House Field, Lower Meadow, and Near Meadow) are similar enough to the 1759 Survey field names to suggest that the TanYard, Tan House and Holly House farm may be the same, or at least neighbouring buildings, John Henry Lane in his 1914/16 History of Newton books stated `This farm apparently derived its name from the tannery that once stood near, and the adjoining thatched cottages were said to be occupied by the workmen

It there-for seems reasonable to suggest that considering all the available evidence that a working Tannery was in existence on the farm site or very close to it.

Buildings of one sort or another have been documented as being on this site from as early as 1745, over the years there have been quite a few changes, old buildings being demolished, and new replacements erected.

It is believed that the earliest mapped buildings seem to have been demolished sometime between 1849 and 1893.

The three buildings which were still standing were recently demolished as the site was prepared for development.

The largest of these was on the east side, aligned roughly north-south, and its believed this was built between 1745 and 1827. The map sequence from 1827 until the present day shows that the original building was extended northwards between 1849 and 1893.

The other two buildings which were demolished recently were smaller, and were built between 1849 and 1893.

A long, narrow building aligned roughly east-west in the north on the site was built before 1745, and was demolished between 1849 and 1893.

The site has at its north Crow Lane, which according to Henry Lane (History of Newton), The name `Crow Lane is thought to come from the French word for cross, croix, and to have been so named because the Roman road crossed its path, all the more fitting for this development site, since its here that the Roman Road and Crow Lane actually Cross.

Crow Lane runs from Newton High Street in the east to what was common land and the hamlet of Newton Ends in the west. The Hamlet of Newton Ends, and presumably also Crow Lane, date back to at least the fifteenth century, when the Newton Ends was recorded in the 1465 Legh Survey. Overview of the site, showing Crow Lane beyond, and the taffic lights and Cricket Club to the top far right

The Roman road ran between Wigan and Wilderspool, South Warrington, on recent maps its generally shown passing through the Holly House Farm site and apparently traces of the road itself were still visible in fields locally as recently as 1836.

Lanes History of Newton book states that part of the road was discovered prior to 1916 in the Courtyard of Holly House Farm, untill now the site has never undergone an archaeological evaluation for the remains of the road, though four seperate sections of the road were excavated between 1985 and 2002, three of these evaluations were south of Crow Lane, and one was to the NOrth. From these previous escavations it was discovered that the road had clearly been flanked by ditches, and that it was approximately 5 metres in width.

The construction details of the of the road and ditches in each excavation varied, It was presumed these variations are respectful to local differences in drainage and the availability of raw materials.

I will be adding more information about the evaluation dig at some future time, maybe I can report some of the information from the final archaeological report when its available.
I must thank the very helpfull Oxford Archaeology North people, and Stephen Robinson, MD of Wainhomes (North West).