The Story of Burtonwood

In the last 25 years the name of Burtonwood has been carried by thousands of American servicemen to countries all over the world.

It is the only place in the British Isles to bear this name, and is possibly more widely known than Warrington, to which it was originally a subservient manor.

THE WOOD BY THE TUN

Probably the original name of Bur-tonwood was simply ‘Burton’, which means the ‘tun’, or farmstead, by a ‘burh’, or fortifiedmanor. The burh could have been the borough of  Warrington. The wood, however, was a real and extensive royal forest early in the 13th century, and the name had become Burtonwood by this time. The addition of ‘wood’ to ‘Burton’ therefore gives the full meaning of Burtonwood as the wood by the tun, or farmstead, near a fortified place, or burh.

The registers of Burtonwood have been published for the years 1668-1837 but do not contain any individual named Burtonwood. The only person of this name to appear in local records was John Burtonwood, who was described in 1622 as ‘lecturer’ at St Helens Chapel. 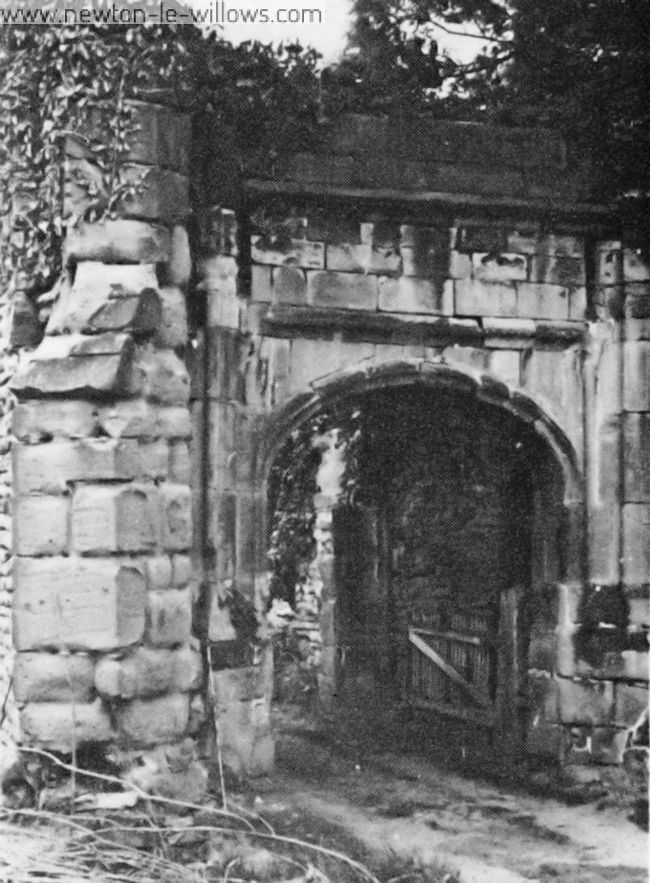 All that remains of the entrance to Bradleigh Hall—once the Manor House of Burtonwood—with the original cobbles still visible.

LORDS OF THE MANOR

The earliest mention of Burtonwood occurs in a Charter of King John dated 10th October 1199, whereby the town of Pendleton was granted to Yarforth de Hulton in exchange for Burtonwood and Kersall Wood, which John had given to him while he was Count of Mortain. Henry I placed Burtonwood in his forest between Ribble and Mersey, and in 1228 it was perambulated in accordance with the Charter of the Forest of 1224-25.

The Manor was sold to William Boteler, seventh Lord of the Manor of Warrington, in about 1264, and the Boteler family then settled at Bewsey in Burtonwood until the last of the Botelers, Edward, alienated the Manor to Richard Bold in 1580.

Scene of the Great Draining Match in 1853 on the Burtonwood Estate, with the chimneys of nearby Newton-le-Willows in the background. Courtesy of Warrington Reference Library.

Although the small community of Burtonwood depended for centuries on agriculture, it is noticeable from the registers that other trades, especially watchmaking, begin to form a moderate proportion of the trades and skills supporting the inhabitants of the Parish in the 18th century.

Records of 1924 state: ‘The soil is clayey and the chief crops are wheat, oats, potatoes, grass and clover’.

But that comment was made over 50 years ago, and Burtonwood has seen many, many changes since then. Its rateable value in 1974 was £401,171 and the population has risen to just over 5,000.

The Americans who manned the great air base during the war left in June 1959, but came back again, although in less great numbers, in 1967—providing numerous jobs for civilians.

The kindness and generosity shown to them in the dark war years by Burtonwood people still abounds, and the village pubs – The Bridge and The Elm Tree Inns—echo once again to the trans-Atlantic twang of the servicemen. 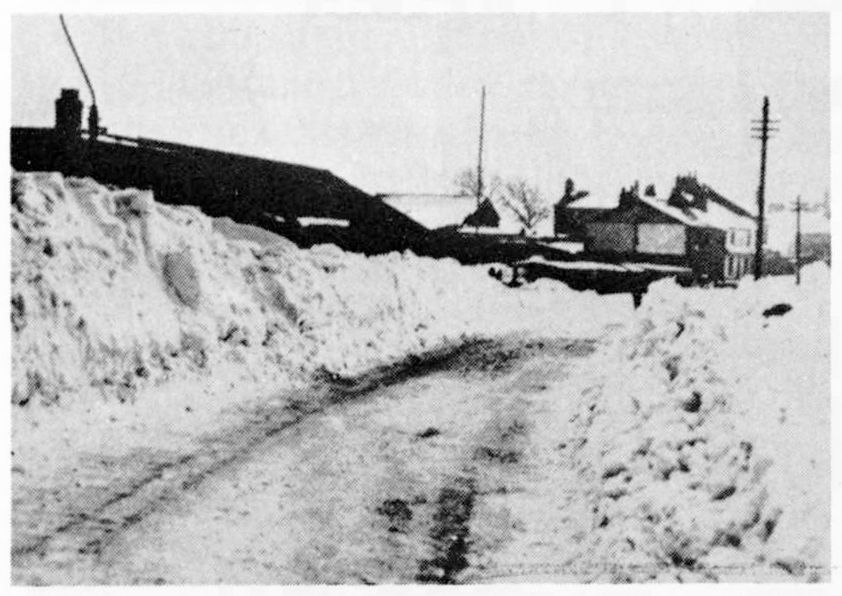 The snow fell thick and fast in the 1940’s. This scene is of Chapel Lane looking towards the Elm Tree Inn.

A contributory factor to Burton wood’s expansion was the designation of Warrington as a New Town in 1968, with the acceptance of an Outline Plan in 1973.

While retaining its mainly village atmosphere, Burtonwood lends itself to increasing popularity as a residential area by the very nature of its geographical position. Residents can enjoy the delights of living in a rural environment and yet still be within easy commuting distance of the neighbouring industrial towns. And, with an ever-expanding population, the village has developed architecturally to cope with the demands for leisure and education within the community.

Burtonwood now has two junior schools, a County Primary in Green Lane and St Paul of the Cross Roman Catholic Primary in Clay Lane. The older children attend secondary schools in Newton-le-Willows and St Helens. The main sources of employment in the area are in the nursing, engineering and brewing industries. 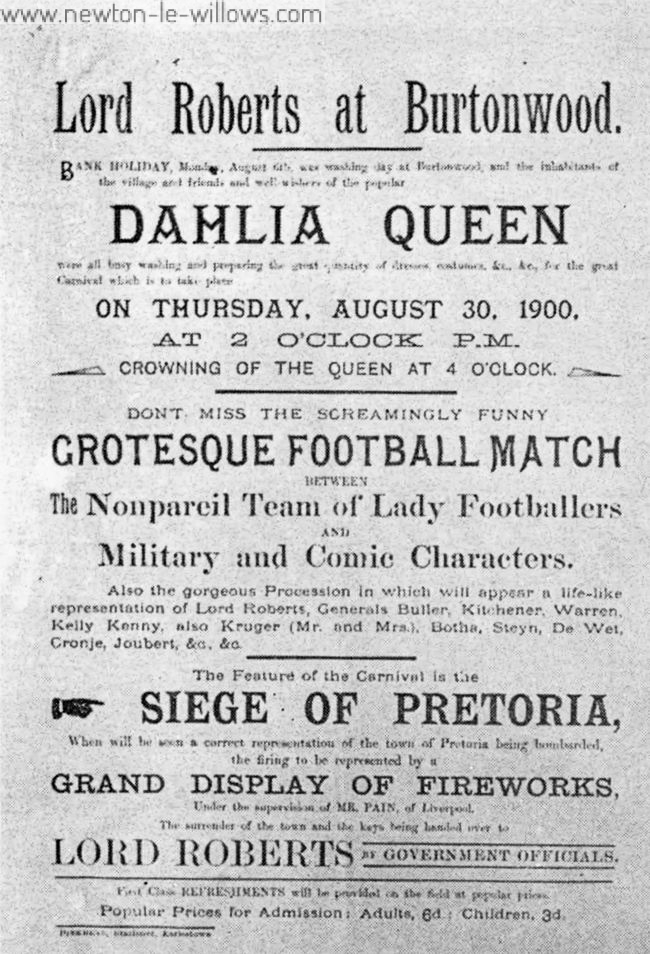 One of the big events in village life many years ago—the crowning of the Dahlia Queen. This poster, dated 1900, was on file at Warrington Reference Library. 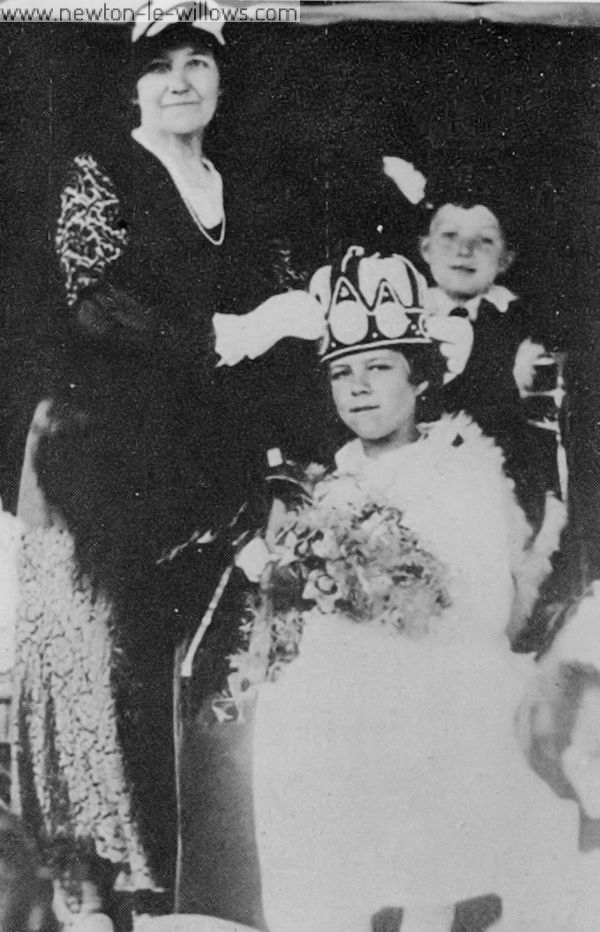 The village although one of many contrasts—has managed to retain some of its old customs, which at one stage were in grave danger of dying out. And although the crowning of the Dahlia Queen— a great village event in years gone by—no longer takes place, its place in the calendar has been taken by the annual Burtonwood Carnival. This itself was ‘resurrected’ in 1973 after an absence of six years, and now proves to be a real crowd-puller.

On the local government front, Burtonwood is administered by the Warrington Borough Council and, although it has its own Parish Council, two representatives serve on the Warrington Council, to keep an eye on matters which might affect the village. A far cry indeed from the year 1199, when King John ruled with an iron fist and Burtonwood was just a tiny hamlet nestling in his vast hunting forest! 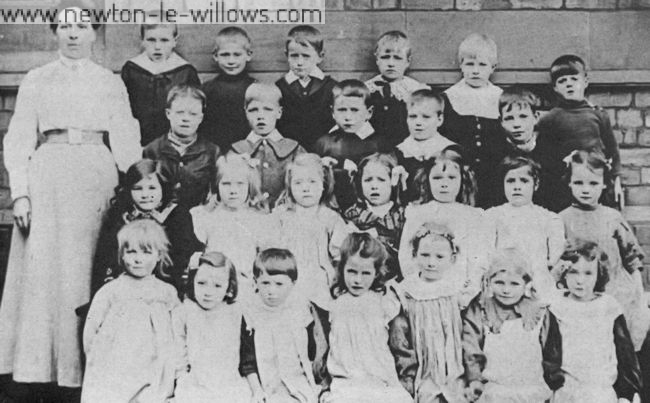 Schooldays remembered! Date unknown, probably of the village school in the early 1900’s, but it should jog a few memories.